Bobby Hamilton Jr. will make his first start for the team at Mobile International Speedway’s “Mobile ARCA 200” on March 22nd.

MEMPHIS, TENNESSEE – Carter 2 Motorsports announced today that NASCAR veteran Bobby Hamilton Jr. will be joining the team on a full-time basis for the 2014 ARCA Racing Series presented by Menards season. He will make his first start for the team at Mobile International Speedway’s “Mobile ARCA 200” on March 22nd. Hamilton Jr. will drive the number 40 Carter 2 Motorsports Dodge Charger. 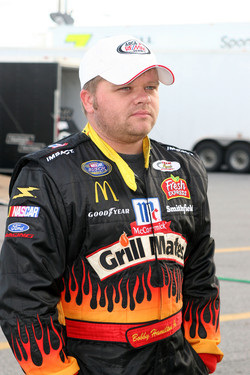 The 36 year-old native of Nashville, Tenn., returns to ARCA after racing at all three levels of NASCAR competition. “I’ve always liked running in ARCA,” said Hamilton Jr., who recorded his first series start in 1998 at Pocono, “plus I love the old school car that’s run in the series. I’m also thrilled to be going back to some of the historic short-tracks that ARCA runs on”. The car that is presently campaigned by teams in ARCA Series competition is termed the “Generation Four” car by NASCAR and was last run in Sprint Cup competition in 2007.

During his career, Hamilton Jr. has competed in 64 NASCAR Sprint Cup Series events, 253 Nationwide Series events and 37 Camping World Truck Series events. He has captured 5 victories in Nationwide Series competition, with wins coming at New Hampshire, Kentucky, Chicago, Memphis and Phoenix. “I’m pretty happy to be going back to the tracks that I’ve scored a win at,” stated Hamilton Jr., “plus I’m excited to get back to tracks like Salem Speedway. I ran there at the start of my career. It’s going to be like being a kid again when I go back to that place.” In May 1997, Hamilton Jr. drove a Pontiac to a seventh place finish in the NASCAR All-Pro Series “Owens – Corning 250” at Salem Speedway, after leading 37 laps of the 250 lap event.

Carter 2 Motorsports team owner Roger Carter started his racing career with Sadler Brothers Racing, a Nashville-based team owned by the late Earl Sadler. During 1998 and 1999, Hamilton Jr. drove in both NASCAR Nationwide and ARCA Racing Series competition for the team. “I had the honor to be there with Bobby at the beginning of his career” stated Carter “I’m very happy with the level of experience that he brings to our team. I definitely believe that we can make it to victory lane in 2014. I think that would make old ‘Uncle’ Earl Sadler proud. ”

Hamilton Jr., son of NASCAR legend Bobby Hamilton, is looking to make a permanent home in the ARCA Racing Series. “It’s a great series with a bunch of competitive teams”, stated the second-generation driver, “I would love to finish in the Top-Ten in driver points for 2014. I want to run the series until I retire and hopefully score a bunch of victories along the way. ARCA brings my career full-circle. It’s sort of like going back home.”