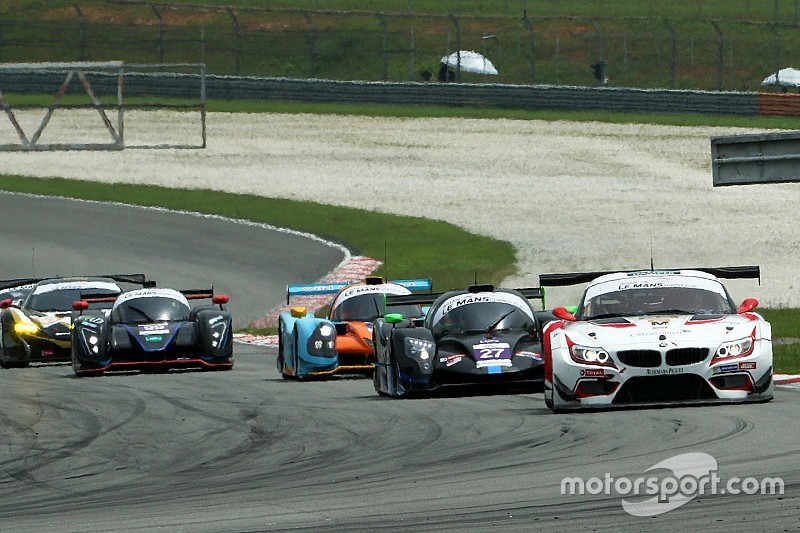 A faultless run from the #8 Jackie Chan DC Racing x Jota Sport in their Oreca 05 Nissan, has seen them claim an outstanding race win in the opening round of the 2017/18 Asian Le Mans Series, the Zhuhai 4 Hours.

The result was all the more impressive for the rookie driver Harrison Newey who claimed his first win in his endurance racing debut this weekend.

In the GT class, the battle was even tighter. With 45 minutes left there was just 6 seconds separating the top three cars in the GT Class. The battle was particularly fierce throughout the whole race between the two FIST – Team AAI cars. In the end it was the #91 BMW M6 GT3 that came out in front of the #90 Mercedes-AMG GT3. In third place was the #66 Audi Sport Customer Racing Asia by TSRT entry.

After claiming his first solo Pole Position in LMP2 yesterday, Thomas Laurent started the race alongside the team’s sister car, the #7 Oreca 05 Nissan. He made a clean get away and began to pull away from the pack.

Behind him, the #90 FIST-Team AAI with Rafaelle Marciello behind the wheel, was given a drive through penalty for a jump start. It did not take Rafaelle long to get back on the tail of the field though, and was battling closely with his team mate shortly after.

After a strong start the ARC Bratislava piloted by Rik Breukers made a small error and went off the track, dropping to the back of the field.

While Thomas in the #8 was running comfortably in the lead, things were not going to plan for the sister car. After just 10 minutes the #7 stopped on circuit, he was able to rejoin at the rear of the grid, however it was a sign of things to come.

A full course yellow came out after just 15 minutes due to debris on track. BBT took this opportunity to stop for a quick splash of fuel – something that they hoped may come to help them later in the race. The debris was a result of an incident between the lead car, car 8, and the #66 Audi Sport Customer Racing Asia by TSRT entry. The incident resulted in Peng Liu in the #66 being given a ten second stop and go penalty as a result of causing the accident.

After just half an hour of racing, Thomas had pulled out an impressive lead from BBT. Behind the wheel of the BBT Ligier was Davide Rizzo who won the Asian Le Mans Sprint Cup with WIN Motorsport earlier this year. He has now made the step up into the LMP2 class with BBT.

During their pit stop the team were required to repair significant rear left damage, caused during the earlier incident. The stop was very lengthy, but thanks to the strong gap Laurent had managed to pull out before their stop, they came out in 7th place. His job done, Thomas handed the car over to rookie Harrison Newey to fight his way back up the order.

The sister car driven by team co-owner, Chinese driver David Cheng, was struggling badly with power steering problems and other electrical gremlins occurring that caused them to spend significant time in the pits.

After the first hour, it was the Ligier JS P3 of Taiwan Beer GH Motorsport being driven by Hanss Lin that led LMP3 class, with the KCMG entry just two seconds behind them. In third place it was the Viper Niza Racing entry with Dominic Ang behind the wheel.

After the penalty for the jump start, Rafaelle got his head down and settled into the lead of the GT class in the FIST-Team AAI Mercedes-AMG GT3. The team ran different strategies for their two cars with the Mercedes starting with their highest rated driver, and the BMW starting with their gentleman driver. Rafaelle is a platinum driver which means he is significantly more experienced than Junsan Chen who is a bronze rated driver.

After the pit stops, it was reversed with Lam Yu jumping behind the wheel of the Mercedes, and Australian Supercar driver, Chaz Mostert getting in the BMW.

After their long stop Harrison set about fighting back the time they lost in the pit lane. Thanks in part to their decision to stop early during the safety car, Davide held the lead after the first hour. In a very mature drive, Harrison took the lead on lap 47.

Just prior to the half way point the leader in LMP3 – the Taiwan Beer GH Motorsport team were handed a drive through penalty for a violation of FCY speed. At this point the team was holding a very small lead over the KCMG team who were right on their tail. The drive through dropped them into second in class ahead of WIN Motorsport.

At the half way mark the lead was held by Harrison in the #8 Oreca, ahead of the BBT car that had just been handed over to their gentleman driver, Anthony Xu Liu. Given the additional fuel stop BBT had early in the race they were slightly out of synch, but close to a lap behind.

Just after the half way mark the Viper Niza Racing Ligier JSP3 went off at T7 and got stuck in the gravel bringing out a full course yellow while the marshals recovered the car. They were able to get back onto the track, but dropped well down the order and went straight into the pits. They got back out again, however they had dropped well back.

Chaz had closed the gap significantly to the sister FIST – Team AAI during his stint, but the Mercedes was able to take advantage of the full course yellow to pit and remained in from of the BMW.

A puncture for WIN Motorsport after 2.5 hours of the race cost them a lot of time with Richard Bradley behind the wheel.

After getting caught by a slower car, a spin and flat spotted tyre for the KCMG entry saw them pit early. They used this opportunity to put class Pole Sitter, Josh Burdon into the car. Josh set about closing down the one lap gap to the #11 Ligier with Shaun Thong behind the wheel. The blistering pace seen during qualifying was there in this stint as well, with Josh going up to four seconds a lap quicker than Shaun. Josh was able to do enough to close the gap and took the lead when the #11 came into the pits. A lead he held until the end of the race.

In the GT Class things were getting very close. With just 30 minutes to go there was just 4 seconds between the top two GT runners with the BMW leading the Mercedes.

In the end it was the BMW that came out on top. The Mercedes was battling brake issues that were getting progressively worse as the race went on. They managed to hold on to second place and finished ahead of the Audi Sport Customer Racing Asia by TSRT entry.

While BBT put in an impressive performance this weekend, the #8 Jackie Chan DC Racing x Jota Sport entry was just in a class of its own, ultimately coming home a lap ahead of the BBT entry.LMP2

“A big thanks to all of the team and a big congratulations to our rookie! And of course, my other team mate!”

Harrison Newey: “Thomas did a great job and gave me the car with a healthy lead, unfortunately we did lose a lot of time in the pit stop, so we dropped back.

“I jumped straight into the car with new tyres and felt good. I pushed hard, then caught and passed the leader and felt comfortable from there. It went pretty quickly for something that is almost triple the length of any race I have done before!”

Stephane Richelmi: “It was almost an easy job – when you jump in the car with almost a lap lead it’s a pretty cool feeling, but I had to do a double stint and the team were keeping me updated with how everything was going, and the car felt really good so for sure it is always good when everything is fine and you can push wherever you want. The only bad thing was when I went off track in turn one, I made a small mistake in the marbles, fortunately it didn’t change the results.

“It is a pretty good start for our Asian Le Mans Series campaign, we are here to win the Championship so we have done the job. The team did a flawless job this weekend, and hopefully we will do the same in Fuji.”

The full results can be found here.