Rookie set for debut with another waiting in the wings

There will be yet another new face competing for Team HARD in their S2000 Honda Civic during rounds 22, 23 and 24 of the Dunlop MSA British Touring Car Championship with 20 year old Howard Fuller set to make his series debut.

So far this year the car has been run by team boss Tony Gilham while American racer Robb Holland has competed at the last two events during his two race deal and is unable to compete this weekend due to a prior commitment.

I’m confident that he’ll do a good job.

However Fuller has now decided that Touring Cars is now the route he wishes to go and this year competed in a couple meetings driving for Gilham/Team HARD in the VW Cup and said, “We’ve decided this is the best path for me to be taking,” confirmed Fuller. “I’ve competed in couple of VW Cup races and the BTCC is where I really want to be. It’s going to be a steep learning curve but racing at Rockingham is all about me getting used to the crowds and the atmosphere. I’m very, very excited – if a bit nervous – to be racing against so many big names. I’ve got a test, though, at Brands Hatch on Friday and that should give me a chance to set-up the car to my liking and to get used to the Dunlop tyres.”

Despite his relative lack of experience team boss Gilham has no such worries about giving Fuller his debut and said, “I’m confident that he’ll do a good job and make a few people sit up and take notice of his talents. He takes a sensible approach and has already been a winner at Rockingham this season for our VW Cup team.” 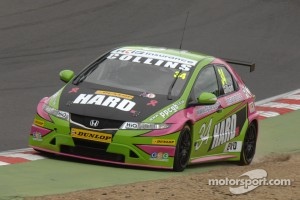 Another young driver hoping to get onto the grid before the end of the season is Joe Girling who has announced plans to enter with popular Tech-speed Motorsport in a turbo powered Chevrolet Cruze as driven by John George in last year’s championship.

Fans Favourite Paul O’Neill was also a regular driver for Tech-speed as both driver/team often punched well above their weight which included a best position of second place last year. Tech-speed had hoped to race O’Neill again this year after fitting the NGTC Swindon engine to the championship winning Cruze from 2010 but budge restrictions put a stop to their 2012 plans.

Now they plan to enter Girling some point before the end of the season although next year is very much the main focus with team boss Marvin Humphreys saying, “We’ve run cars in the BTCC since the early Nineties, we enjoy the racing and the atmosphere in the paddock and we are keen to get back in there. Our intention is to be on the grid for the whole of next season and it would be nice if we can do this year’s final round at least as a bit of a shakedown. We are working on the car and it’s now back from the paintshop. Joe is a pal of Paul’s (O’Neill) with whom we maintain a great relationship and he’s working hard to make it happen. A turbo-powered S2000 car like the Chevrolet would be a good way for Joe to learn before maybe graduating to one of the newer NGTC cars.”

Girling is a front runner in the Dunlop Production Cup driving a Courtney Motorsport Vauxhall Astra but has also had driver coaching from triple BTCC champion Matt Neal.

Girling admits having Neal has driver coach has inspired him to become a BTCC driver and said, “Having Matt coach me has really made me want to be in the BTCC, plus I want to be with Tech-Speed because they understand the car and I think their personality and morale are among the best. They did great things for Paul. I’m being totally realistic about what might be achievable but a proven S2000 car like the Cruze would be the ideal car to get started in.”