A welcome and popular return to action for the Swindon racer just five weeks on from his huge, car-wrecking accident at Thruxton at the beginning of May.

Handy Motorsport’s Simon Belcher posted three solid race finishes during the fourth event of the 2014 Dunlop MSA British Touring Car Championship season at Oulton Park International Circuit on Sunday, 8th June – a welcome and popular return to action for the Swindon racer just five weeks on from his huge, car-wrecking accident at Thruxton at the beginning of May.

With his rebuilt Toyota Avensis only completed a couple of days prior to this weekend’s event, the 40-year-old went into rounds 10, 11 and 12 of the campaign unsure of what to expect after a tough build-up during practice and qualifying.

Frustrated by set-up difficulties, Belcher’s car also suffered power-steering failure which prevented him from posting a genuine lap time in qualifying. Nonetheless, he chipped away in all three races to make improvements each time and ultimately just missed out on his target top 20 in race three. 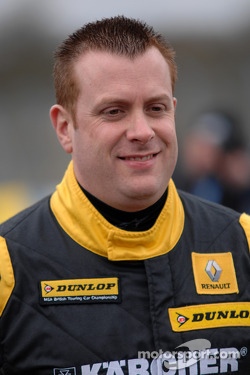 “It’s been a frustrating weekend”, said Belcher, “We had set-up issues in practice and then, in qualifying, we had to park the car up due to the power-steering. We just didn’t find the sweet spot at all, it’s almost been like starting from scratch with a new car again this weekend. As ever, though, everyone has worked incredibly hard and it’s fantastic we made it to race at all after Thruxton.”

Back on the grid thanks to a remarkable effort by Handy’s partner team Speedworks Motorsport to repair his almost written-off Toyota Avensis, Belcher was determined to be as competitive as possible while also bearing in mind the need to gradually bed the car back in.

Beginning the first of Sunday’s races from an uncharacteristic 30th on the grid, the KÄRCHER-backed driver faced an immensely tall order but started as he meant to go on by immediately grabbing one place off the line before threading his way through into 25th position prior to the end of the lap.

Although shuffled back to 27th position by two recovering cars, those of Warren Scott and Hunter Abbott, Belcher re-gained one of the places on the final tour when Martin Depper pitted his Honda Civic due to a puncture.

Lining-up in an improved 26th place for round 11, Belcher was nudged back a couple of positions on the opening lap but maintained his composure and gradually moved back up the order as several rivals fell by the wayside. In the end, he finished in 23rd position which would be his starting place for the third race of the weekend, round 12.

No sooner had the final Oulton Park encounter got underway, the Safety Car appeared due to a tangle at the first corner. At the re-start three laps later, Belcher held 21st position and then made the breakthrough to get into the top 20 at the expense of American driver Robb Holland. Holding the place right up until the closing stages, the Wiltshire racer was elbowed back to 21st just at the end.

“The pace we had in the last race is where we should have been from the start in FP1, I needed the car I had at Brands Hatch and Donington but at least we had three race finishes and we moved forward in each one”, said Belcher, “The aim for the weekend was to break the top 20, we didn’t quite manage that but we definitely made progress in each race.

“The team can spend the next three weeks before Croft fettling the car now, rather than having to re-build it! The plan is to go there and continue the progression, we need to be back where we were before Thruxton and I’m confident we can be.”

Croft Circuit in North Yorkshire will host rounds 13, 14 and 15 of the BTCC season three weeks from now, over the weekend 28th/29th June.