30 years of DTM: Ellen Lohr the only woman on the very top

Ellen Lohr remained the only woman to have won a DTM race.

Realising the significance of her DTM win she celebrated on 24th May, 1992, at the Hockenheimring Baden-Württemberg, took Ellen Lohr many years. “Back then it felt great to have won. Today, however, this win means far more to me as I have remained the only woman to have won a DTM race for so many years,” says the former Mercedes-Benz works driver regarding her historic win.

And her race win didn’t come out of the blue. “I already finished runner-up in the previous race”, says Lohr, recalling the maiden win of the future DTM record champion Bernd Schneider two weeks ago at Berlin’s AVUS. In 1987, still a BMW driver in that year, Lohr already had finished second at the Salzburgring. “And in 1991, at Zolder, I seemed to be on the way to securing my maiden DTM win until oil on the track made an end to my hopes,” the today 49-year-old reveals.

On 24th Mai 1992 at Hockenheim, however, everything should run perfectly, for her. “It was a tyre decision,” she recalls. “Keke Rosberg opted for taking the risk to race on the softer compound and so, I knew that I would have the chance of closing in on him, in the final stages of the race.” Short before the race was over she passed the former Formula 1 world champion with her Mercedes 190E 2.5-16 Evo2 for the lead and the race win – although the Finn tried hard to fend her off. “Today, it’s a well-known key factor in Formula 1 but Ellen already understood the significance in those days: she raced with a lower tyre wear than anybody else,” stresses Hans Werner Aufrecht, Ellen Lohr’s team principal at AMG in those days and chairman of DTM rights holder and promoter ITR. e. V. today. To add with a smile: “For Keke, coping with this defeat was anything but easy.” 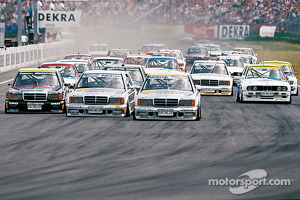 Ellen Lohr also demonstrated her pace in the second race of the day. Due to a collision in the opening stages of the race she dropped back to the end of the feel but afterwards, she delivered in impressive style and battled her way back up. “I already had worked my way back up to fifth when my car caught fire. Altogether, it was a memorable weekend,” says Ellen Lohr who still loves to take vehicles to their limits: no matter if racing trucks, classic touring cars or rally vehicles.

Nonetheless, her triumph at Hockenheim in 1992 should remain her only DTM win. Before she retired from the most popular international touring-car series for good – at the end of the 1996 season – she secured another podium by finishing third at Diepholz in 1994. Altogether, she contested 144 races and secured 302 points.

A word from... Miguel Molina

Keke Rosberg explains why he became an F1 "recluse"