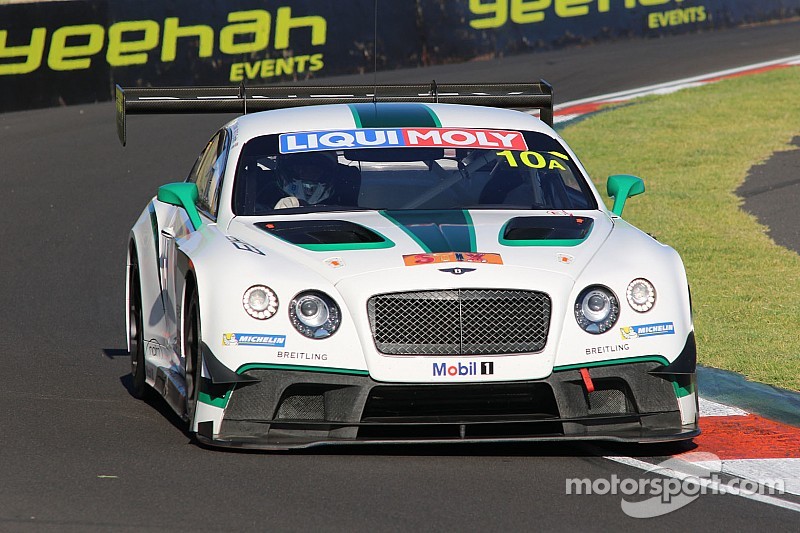 Bathurst – Bentley Motorsport made an impressive debut at the famous Mount Panorama circuit in Bathurst, Australia, taking a fourth-place finish after twelve hours of incredibly close racing. The #10 Continental GT3 of the British driving trio of Guy Smith, Steven Kane and Matt Bell drove a strong race to take the lead in the final hour, only to be defeated in the final two laps by the #35 Nissan utilising a Balance of Performance power advantage. Driving the final stint, Matt Bell managed to hold second place until the last corner, when he was forced off line by two bouts of contact from chasing cars, ultimately crossing the line fourth.

The sister #11 car of Andy Soucek, Maximilian Buhk and Harold Primat endured a tougher race, having made progress in the opening hours of the race to climb from P21 on the grid to be racing in the top ten. A series of drive-through penalties cost time, dropping the car down the order, until a failure in the closing hour caused by rear-end contact left the car without drive. However, for new Bentley Boys Andy and Maxi, who will drive together all season, the race was a great opportunity to compete together for the first time alongside the drivers of car #10.

“We came to Bathurst to show the pace of the Continental GT3 over one of the toughest endurance races in the word. While we’ll leave here knowing we’ve succeeded in that mission, and proud of finishing in the top five, we also know it could’ve and should’ve been more. The Bentley Boys drove an outstanding race and it’s very tough to see their efforts undone on the closing lap by what appeared to be unsportsmanlike driving.”

Rolf Frech, Bentley’s Member of the Board for Engineering, comments:

“I’m very pleased with the performance that the team has showed today. The pace of the cars, the efficiency of the pit crew and the speed of the drivers bodes well for the season ahead. “

The Story of the Race

The #10 Continental GT3 of Guy Smith, Steven Kane and Matt Bell started the race in P10. Over an opening double stint, Guy climbed to P4 before handing the car to Matt Bell on lap 66. Matt piloted the Continental GT3 all the way to P2 before assuming P1 as cars pitted behind the safety car. A blocked drinks tube combined with increasing cabin temperatures behind the safety car meant that Matt had to pit slightly early as fatigue in the 30°C temperatures set in, and after Steven Kane replaced him the car sat P10.

By lap 105, Steven was up to P8, when a drive-through penalty was awarded for a race restart procedural infringement. Fortunately, Steven maintained his position, and by lap 131 he was up to P3. Guy then started his second stint, driving with precision and outright speed to claim P2 by lap 162. He finished his stint on lap 170, when a rejuvenated Matt Bell (complete with working drinks tube) took the wheel for the second time. His stint was going well until contact with a lapped competitor resulted in an unnecessary and harsh drive-through penalty, which dropped Matt to P6.

However, by the time he stopped on lap 207, Matt had recovered to P2. Steven’s second stint started behind the safety car in P6 after the stop, but by lap 230 Steven had retaken the lead as other cars made their pit visits. He held the lead until giving the car back to Matt Bell on lap 242, who rejoined P3 and then made his way to the lead of the race as others made their final pit stops. Two safety car in the closing minutes added to the tension as the race clock counted down, and while Matt held the lead during the first race restart, at the second restart the more powerful #35 Nissan took the lead. Matt showed great skill in maintaining second place until the last corner, when a fight for third place between the #15 Audi and #97 Aston Martin resulted in Matt being forced off line and almost in to a spin, ultimately finishing fourth.

Maximilian Buhk, Andy Soucek and Harold Primat started from P21 on the grid in the sister #11 Continental GT3. It was Maxi who started the race, finding space in the opening laps to climb 11 places to P10. He handed over to Harold Primat on lap 29, who then faced a challenging stint that involved two drive-through penalties following race restart infractions and a spin after light contact with a backmarker. At the end of his two-hour driving session, Harold pitted from P21, so that Andy Soucek could start a recovery. From lap 81 to lap 143, Andy climbed eight places to P13, before handing back to Harold, who drove a short stint until lap 170 when Maxi Buhk rejoined the race after a driver change in P12.

On lap 207, Andy Soucek took charge of the #11 car once again, continuing in P12 until a stop on lap 229 for a brake pad change. He emerged from the pits in P16 and then handed the car to Maxi Buhk on lap 244. Maxi continued to push hard until lap 253, when a failure in the drivetrain caused by damage to the rear of the car from earlier contact left the car stranded and forced an unhappy retirement.

Guy Smith, car #10: “This race has got to be one of the most exciting of my career. It wasn’t like an endurance race – it was more like a 12-hour sprint. I’m really pleased with our pace and how strong our car was today, but ultimately we couldn’t quite hold on for the win. We know we should’ve finished second, but unfortunately racing isn’t always fair. We’ve learnt so much this weekend and will make sure we’re even stronger for the start of our European season at Monza.”

Steven Kane, car #10: “We came here with an ambition to race hard and well, and we certainly did that today. We got the setup of our car right and showed great pace throughout the 12 hours, and to finish such a race less than four seconds from the winner is no mean feat. Matt was phenomenal in the last hour to hold on for as long as he did, and the third-in-class trophy is a small consolation. We can use what we’ve learnt here to help with our Blancpain campaign this year, and we can’t wait to get started.”

Matt Bell, car #10: “It was amazing to come here with Bentley and we put on a great show. This was my first race in the Continental GT3 and I’m thoroughly impressed with the car that Bentley Team M-Sport has developed. Guy and Steven were amazing throughout the race, and put me in a position where I could battle right to the last corner. It’s a shame we couldn’t have a clean race finish, but I as a driver and we as a team are rightly proud of our performance.”

Maximilian Buhk, car #11: “This was a real rollercoaster of a race for us. We started strongly and made up so many places, getting in to the top ten, but the penalties dropped us down the order again. I was still enjoying the race in the top 20 when we had a failure and the car lost drive. These things happen, but we leave here knowing that we have a very fast car – so the season ahead looks good.”

Andy Soucek, car #11: “The weekend has been tough and we were obviously hoping for a better result. However, there are a lot of positives to take from here – we arrived at a new circuit for the car, adapted quickly, and had really good pace. That gives me confidence for the season and I’m really looking to getting started with the Blancpain Endurance Series.”

Harold Primat, car #11: “This has been a really mixed race weekend for me. I’ve enjoyed working with the Bentley team and getting to know the Continental GT3, but some driving mistakes meant I had a really difficult first stint. We regrouped as a team really well and got back on the pace, and I was much happier with my second stint. Overall it was a good experience with the new race car and we can take away knowledge for my season with Bentley Team HTP in Europe.”