After several aborted starts, the famous McLaren brand will finally return to the Mountain in a competitive form during the 2014 Liqui-Moly Bathurst 12 Hour.

The team finished third in a Porsche GT3 R last year but will give the McLaren brand their first competitive start in an endurance race at Mount Panorama should they take the 6:15am starter for the race this year.

Kirkaldy is a co-owner of the British-based open wheel and GT team CRS Racing – a team heavily involved in the initial development of the 12C GT3 racer. 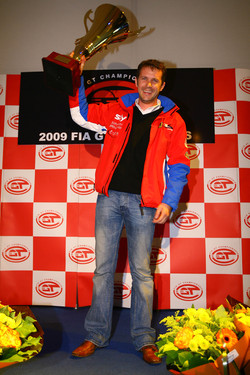 Along with some of the world’s best brands, the list of drivers confirmed today is equally sensational.

The field includes world championship-winning GT drivers, Porsche Supercup champions and former Formula 1 stars - plus some of the current full-time stars from the V8 Supercars Championship like Craig Lowndes, Will Davison and Jason Bright.

Former Bathurst 12 Hour winners are present in the field; with no fewer than six entered in a quest for Bathurst success; Rod Salmon, Christopher Mies, Craig Baird, John Bowe and 2013 winners Bernd Schneider and Thomas Jaeger.

Add Steven Richards (M Motorsport Lamborghini) and Greg Murphy (Trofeo Motorsport Corvette) to the list and there are five former winners of the Bathurst 1000 classic in the field; including reigning winner Richards.

Several teams are yet to nominate their final driving combinations, the notable spaces left amongst the GT3 outright field including the second BMW Z4M GT3 entered by former world champions, Vita4One racing.

The star power isn’t just limited to the outright class, either, with several big names set to join the field in Class B for older specification GT3 cars.

The three invitational classes are expected to be extremely competitive as more production-based machinery line up in classes D (Invitational 3001cc+) and F (Invitational up to 3000cc).

The much talked-about MARC Focus endurance racers entered in Class I are yet to confirm the bulk of their driving line-up, however team owner and project leader Ryan McLeod confirmed that Glenn Seton and Russell Ingall tested the cars in Queensland last week.

Godzilla returns to the Mountain