Bleekemolen puts the number one Mercedes on the pole after the team prepared a replacement chassis for the one damaged in a Wednesday practice crash.

Bleekemolen, sharing the car with Briton Sean Edwards and Emirati driver Khaled Al Qubaisi, the two drivers having already teamed up with to win the Dunlop 24 Hours last year. For the 2013 race, the three are joined by German stalwart Bernd Schneider, a five times DTM champion. 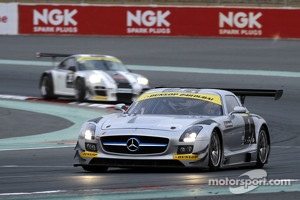 Qubaisi thus becomes the first UAE national driver to be part of the pole position winning team since the race beagn eight years ago.

Claiming pole position was a great reward for the Team Abu Dhabi by Black Falcon for the immense effort that the team members put in after their original car was seriously damaged during a crash in testing on Wednesday.

The team acquired a replacement chassis from the British Preci-Spark outfit that had brought a spare car to Dubai for testing purposes and the Black Falcon mechanics worked all night to convert that car from its sprint configuration to make it suitable for a 24-hour race.

“They put the engine, the gearbox, the fuel tank, the suspension and many other parts from our original car in and really did an amazing job, because the car felt great,” said Jeroen Bleekemolen. “The fact that I was able to claim pole on what was only my third lap of the weekend at the Dubai Autodrome is almost unbelievable.” 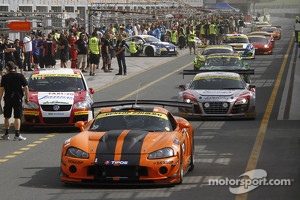 Cars exit the pitlane for qualifying

UAE based teams showed well during qualifying with the Gulf Racing Lamborghini of Fabien Giroix, Frederic Fatien, Stefan Johansson and Khalid Al Mudhaf set to start 13th on the grid.

Other UAE based driver and team combinations include: the Gulf Racing Aston Martin team will line up 10th in the SP3 Class, the Memac Ogilvy Duel Racing SEAT with the Moutran brothers Rami, Ramzi and Nabil who were third in the A3T Petrol Class and the SVDP Racing BMW third in the D1 Diesel Class.

With one Mercedes-Benz, one Porsche, one Aston Martin, two BMWs, two McLarens, two Ferraris and one Lamborghini in the top ten and the fact that the top ten cars are within a couple of seconds sets the scene for a very tight contest for top honours.

At 2.00pm on Saturday (11 January) ATCUAE President and FIA vice president Dr. Mohammed Ben Sulayem will flag off the 82 cars who will battle it out until 2.00 pm on Saturday.

Supercars stars will be in the frame to join Ford's factory driver pool once the Mustang GT programme kicks off.

Ford Performance is no longer pushing for major motor racing categories to adopt electrification or hybridisation.

Ford Performance has Mount Panorama and the Bathurst 12 Hour firmly in its sights as part of its new GT programme.

Kondo Racing doesn’t believe the Nissan GT-R NISMO GT3 would be competitive if it were to return to the Nurburgring 24 Hours next year.