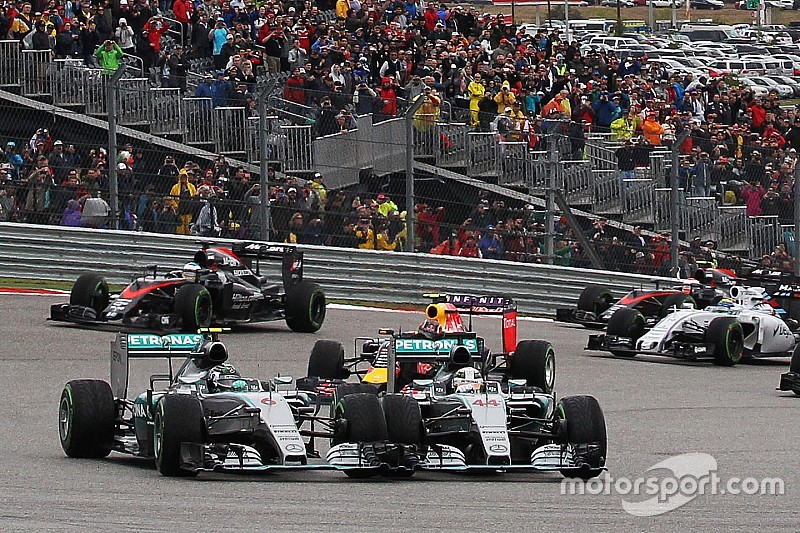 Does Formula 1 need to ditch the boring engine talk and focus more on wild on-track rivalries, like MotoGP is capable of producing? Jonathan Noble investigates.

“It's very clear from the helicopter footage that I didn't want to make him crash, I just wanted to make him lose time, go outside of the line and slow down, because he was playing his dirty game. When I went wide and slowed down to nearly a stop, I looked at him as if to say ’what are you doing?' After that we touched.”

Those are the words of Valentino Rossi, but they could equally have been uttered by Lewis Hamilton as he aggressively staked his claim against Nico Rosberg to the inside line at Turn 1 of the United States Grand Prix.

Yet while Rossi's clash with Marc Marquez, plus the fallout and reaction afterwards, has delivered motorsport's biggest controversy of the year, the best F1 has been able to come up has been a bit of a cap-throwing moment between its two title rivals.

In fact, it says much for the view that F1 appears to has lost its way that paddock chatter, intrigue and the fighting behind the scenes is dominated by engines and not by what is happening out on track.

Chatting to one team boss last weekend about the fascinating battle looming between the manufacturers and the FIA/FOM axis over plans for a 'standard' engine, he admitted that it was certainly a smouldering cauldron of political intrigue.

But then he paused. “But it's not engines that we should all be talking about,” he said. “We need more controversy on track.”

Who wouldn't agree with that?

Despite the views of team bosses, the sport's rulers and many fans that something needs to be done to make the role of the driver more important, right now the platform is doing absolutely nothing to help make the situation a reality.

MotoGP is going through a golden spell right now with the performance between the top bikes delivering the right variability to make it super competitive – and the rider's input invaluable.

Honda's engine allows it to stretch its legs on the long straights, but the strength of Yamaha's frame in long sweeping corners allows it to recover the lost time. Performance breaks have helped Ducati remain competitive too.

That variability of strengths/weaknesses makes the performance so close between the three manufacturers that not only is there a lot of overtaking, but the role of the rider has become even more important. For the few tenths they can bring to the party can make all the difference.

Making riders kings lifts rivalries; and has ultimately set up the simmering tensions between Rossi and Marquez as they fight tooth and nail for any advantage on or off the track. In F1, under the current turbo V6 regulations with tyres that need to be carefully managed, we have been left with a sport where instead the engine is king.

We head to race weekends knowing that Lewis Hamilton or Nico Rosberg will most likely be fighting it out for victory; and ultimately accepting the fact that the battle will be won by the one who finds the best set-up to deliver the perfect qualifying lap on Saturday.

Is it right that A-star drivers like Fernando Alonso, Daniel Ricciardo and Sebastian Vettel can drive their hearts out, deliver the performance of their lives, and have little hope of being able to knock the Silver Arrows off the top?

Austin did deliver something a bit different though. The freak weather that hit Texas meant we were treated to a race where, in the early stages at least, having most power was not the biggest ingredient to success.

Suddenly the influence of the chassis and the driver increased; which is why Red Bull so brilliantly shadowed and then briefly overhauled Lewis Hamilton.

It's why too we had more incidents and clashes than we have seen for a while; as different cars had varying strengths at different points of the race, and the drivers knew that they could make the difference.

While I am not suggesting that F1 drivers need to go down the route of letting the red-mist get the best of them and deliberately force their rivals off track, grand prix racing is in need of some much closer wheel-to-wheel racing – with technical regulations that deliver more performance variability.

The balance of power between the influence of the chassis, driver and engine needs re-adjusting, and there should not be the opportunity to dominate if you get just one of those three pillars right.

Perhaps ultimately, it's the driver element that should actually be the defining factor, and any brilliance on that front should be able to overcome a lot of the strengths that rivals may have in the other two areas.

Only then will we get the kind of simmering rivalries that are a core ingredient of a sport that will draw in more fans. It's why we talk today of Piquet/Mansell, Senna/Prost, Hill/Schumacher and Schumacher/Alonso.

With F1 working on all-new rules for 2017 to make cars faster and more challenging, there is a chance to deliver exactly what it's needed. That opportunity is one that should not be wasted. Get it right, and we will get our Rossi/Marquez rivalries.

Forget cap throwing. It's banging wheels, breathtaking moves and angry drivers out there on track that we want.