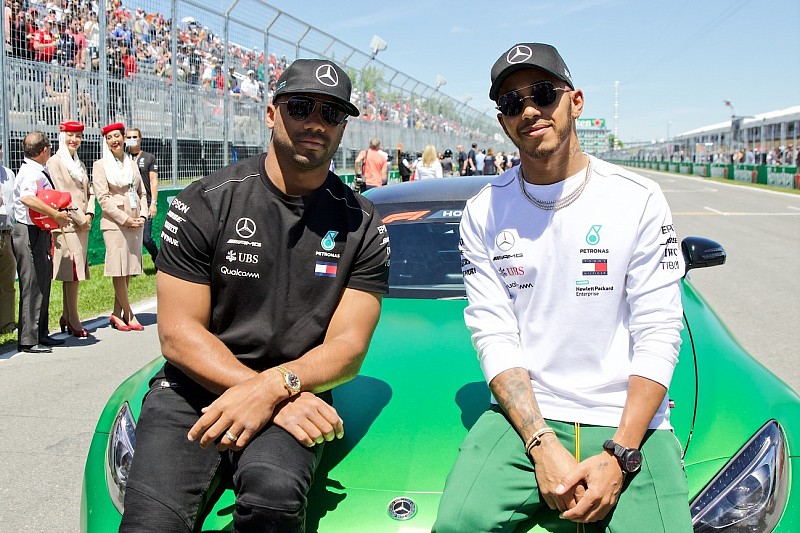 American Football star Russell Wilson says his first Formula 1 experience at the Canadian Grand Prix in Montreal last weekend reminded him of being at a Super Bowl.

The Seattle Seahawks quarterback attended the event with his singer/songwriter wife Ciara, as guests of Lewis Hamilton, Mercedes and mutual sponsor Bose.

Wilson took a hot lap of the Circuit Gilles Villeneuve on Sunday morning with Hamilton in a Mercedes SLS.

“Awesome, absolutely amazing,” Wilson told Motorsport.com of his ride. “We were going so fast in the turns, hitting the kerbs, and we did some pretty sick spins! That was a pretty amazing experience.

“I love cars, and I’ve been getting into a lot more recently. I’m a huge fans of Lewis, and watching him, and with the Mercedes brand and Bose – it’s all been fun.

“I’ve watched a couple [of races], but I’d never been to one before today, and to get the actual experience of it here in Montreal – Ciara and I absolutely love Montreal – and we love Canada, so it’s been cool to come here and see it all.

“It reminds me a lot like a Super Bowl. The experience, the festivities around it, you can see everybody is hyped up for it – it’s like a Super Bowl or Playoff game every race weekend in each country.

“We got to hang out with Lewis a bunch this weekend, we did it last night and before the race. We had some good times, Lewis, Ciara and I. He’s the best in the world, so to be able to share some experiences together, it’s been amazing.”

He also pointed out the headphones that the Mercedes team used in the garage were identical to those used by the Seahawks on the NFL sidelines, for play-calling communications.

“It’s interesting to see the A20 Bose headphones here in the garage, they’re exactly the same ones we use on the football field – also the same ones I use when I fly helicopters,” added Wilson.

“It’s cool to see how they talk in the garage, but they’re the best headphones in the world, so why not?! Great for communication, especially in crucial, tight moments too.”

Wilson – who signed an $87.6 million contract with Seattle in 2015 – was taking a break from NFL training to attend the race.

“We’ve been training and practicing like crazy, which has been good, a lot of fun and get set to, hopefully, go on another championship-winning run.”