Opinion: Qualifying shambles shows F1 is its own worst enemy 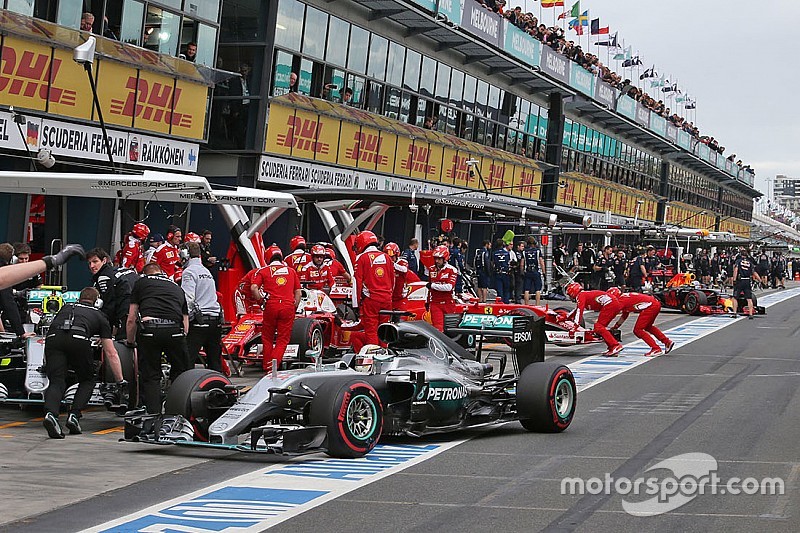 The Australian Grand Prix qualifying fiasco showed some serious thought needs to be given into how Formula 1 is being run at the moment, says Jonathan Noble.

As disgruntled fans started leaving their seats at Albert Park minutes before the chequered flag brought Formula 1's qualifying farce to an end last weekend, one team boss rightly likened what happened to the Indianapolis tyre controversy in 2005.

In the most publicly embarrassing of ways, Formula 1 had again cut its nose off to spite its face: by pursuing a change to a qualifying format that the fans didn't want, the teams weren't really keen for and we all feared beforehand would end up being rubbish.

It was a embarrassment for the sport that should serve not just as a lesson against trying to fix things that aren't broken, but about why some proper thought needs to be given into just how the sport is being run.

For what happened last weekend shows perfectly how the sport's governance process is broken and is now holding F1 back. Many within the paddock share that view, even if some are unwilling to voice that opinion in public.

For a sport that is so on the edge with technology and ambition, F1 can be quite conservative at times.

That itself is probably a legacy of a rule-making structure that involves too many voices, especially from the teams. For although having their input is a good thing, having change depend entirely on what the competitors want only serves to put up barriers to change.

Competitive paranoia rules the day, too much consensus is needed to get things done and inevitably F1 finds itself stuck in a situation of self-inflicted gridlock where it can only move in the direction of least resistance.

After all, teams backed the idea of elimination qualifying not because they wanted it, and not because the fans wanted it - the GPDA Global Fan Survey showed us that last year - but because it was done to avoid a push from Bernie Ecclestone for reverse grids or time ballast.

It was F1's version of Hobson's Choice: a choice based on the lesser of two evils, which is certainly not something a global business like F1 should be doing.

An idea with potential

As a concept, the elimination qualifying idea is not a bad one, and done the right way it could throw up enough variability and jeopardy to mix things up a bit. The devil was always going to be in the detail.

Indeed, for a first experience of it in Melbourne, Q1 and Q2 were certainly pretty spectacular, producing some thrilling intense single lap runs in the early stages, a few shocks (Daniil Kvyat and Valtteri Bottas), and forcing teams to run aggressive on tyre choices for the race.

The issue of Q3 was wholly predictable. But perhaps what is hardest to accept about this whole episode was that everyone knew it wasn't going to work, and yet nobody was willing to stand up and take the responsibility for doing the right thing and averting the public embarrassment.

To have the fiasco at the end of Q3 as an unintended consequence that nobody could foresee was one thing. But let's not forget that at pre-season testing in Barcelona, the team managers and F1 race director Charlie Whiting informally agreed that the elimination end to Q3 would not work and it should revert to the old system of a normal session.

Yet, for a reason that only those within the corridors of power at the FIA's Paris headquarters know, those concerns were not acted upon and a potential tweak to avoid the fiasco that happened never made it back to the Strategy Group and F1 Commission to help prevent what happened in Australia.

It's inexcusable, really, especially because the final wording of the rules had to go back through these bodies anyway for ratification before the season.

What it is symptomatic of is of a sport that seems paralysed by partisan politics, one that lacks long-term vision, and constantly finds itself putting sticking plasters over broken bones thinking they will help.

It would have been a no-brainer at last year's season finale in Abu Dhabi, with the championships long tied up, for F1 to have experimented with an elimination system.

Not only would we then have had something fresh and exciting to talk about, and kept alive a degree of interest while the campaign staggered to an end, but it would have given F1 a proper platform to judge if it was something that could be adopted permanently for 2016.

We would have known whether it delivered variability, we would have known the impact on tyre strategies and best of all, the lessons from the good, the bad and the ugly could have been taken on board over the winter to fine-tune it and deliver for the start of 2016 a qualifying system that everyone was happy with.

Instead, just like the fiasco surrounding double points, it arriving like a bolt out of the blue weeks before the season started made it appear to be a desperate response to a problem that did not exist, at a time when F1 should be focusing on much bigger issues it faces over the next few years.

F1 is facing huge challenges about how to exploit the ongoing migration of fans away from the traditional television audience and on to smartphones, tablets and the Internet.

The doom mongers who suggest that F1 is in crisis because television audiences are in decline are missing a big point, for there are probably more people than ever following the sport right now.

That television audiences are going down should not really be a surprise at all. Firstly, less people watch sport primarily on television these days, and secondly, F1's shift to pay television was inevitably going to slash your audiences.

The difficulty that Ecclestone faces, however, is how to extract commercial revenues from this new media landscape when a lot of his income is based on the old one.

There is no easy answer about what to do, and it may require the sport to take a commercial hit during a transition phase. But unless there is a five to 10-year plan about how to do it - and probably some short term loss-leading investment - the sport is going to miss some big opportunities in the future.

But you do have to wonder how the sport can embrace the challenges of the future when - as shown by the qualifying mess – it seems to be its own worst enemy at present.

The teams have too much say: the political battles between Jean Todt and Ecclestone do not serve as a power-for-good and too many times the fans feel too alienated from what is happening to the sport they so care about.

That's why F1 is screaming out for a strong leadership structure right now, and what it really needs when the new 'Concorde Agreement' deals come around for 2020 is a totally different governance structure that will allow F1 to showcase just how brilliant it is.

A season to remember

If you ignore the Melbourne qualifying shambles, F1 has reason to be really excited about what's in store for 2016.

The fight at the front between Ferrari and Mercedes looks to be on a knife-edge. We have a midfield contest between four or five teams that has perhaps never been closer.

We have new tyre rules that look set to throw up some thrillers in 2016, plus driver aid restrictions that appear to be delivering and some of the most exciting young driving talent we've had for years.

Then for 2017 we have exciting new cars coming.

It seems F1 remains so big in spite of itself.