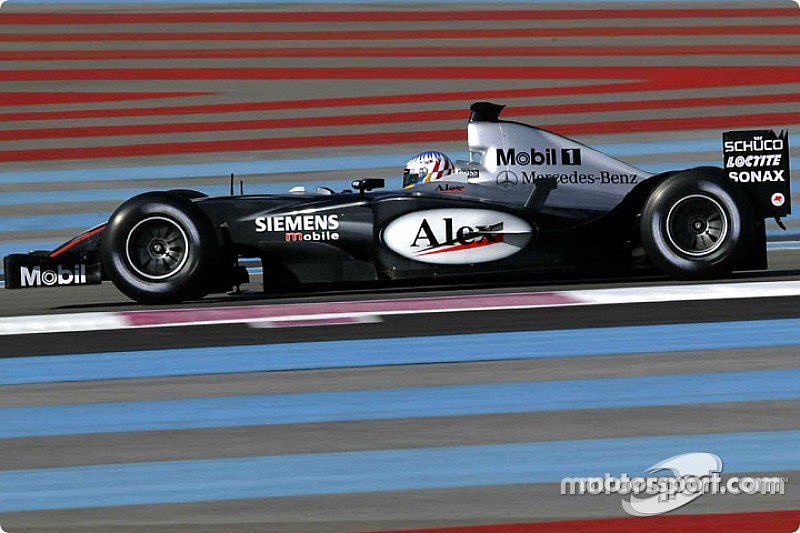 Alex Wurz says the ongoing memories of being able to walk away from Formula 1's fastest ever impact - 300km/h – acts as a permanent reminder for him about why he will never give up pushing for better safety.

The Austrian was lucky to escape uninjured from a testing accident at Paul Ricard in May 2005, when the right rear tyre on his McLaren MP4-20 exploded through the flat out first chicane.

With little time to react, Wurz slammed into the barriers on the left hand side, before spinning across a run off area and hitting another wall. Amazingly, he was not hurt.

"It was apparently the fastest impact speed – more than 300km/h – where a driver walked away uninjured," Wurz told Motorsport.com

F1's recent weeks have been dominated by talk about tyre safety, in the wake of the issues that Pirelli suffered at the Belgian Grand Prix.

But Wurz is only too aware that tyre failures are not a new phenomenon, and were the reason behind his accident.

"I remember that moment being the highlight of the tyre test when we had a tyre war," he said. "I had 10-15 sets of tyres to choose for Canada, and this was set one.

"I knew I could produce the lap record, having done it in the morning, with a slow out lap because the tyres were easy to switch on. So it was only when I went past the start-finish line that I was pushing hard.

"At the time, these were directional tyres so could only run in one direction. For some reason, the marketing people from Michelin decided to change the position of the logos – and this specification of tyre was produced under the new marketing guidelines.

"But the tyre directional sticker fell off before it was mounted. So it was put on the wrong side of the car – meaning it was run in the opposite direction to which it was designed for. So the first time it got a proper load it just collapsed.

"I had no chance to react and things happened so quickly. After the first impact, I tried to brake but by then the car had no front end, so the brakes did not work.

"I was then spinning towards the next wall, but having no brakes, and worrying that my legs would be exposed, I was just hoping that I would not crash head first again. Luckily I was okay.

"The car was destroyed though and couldn't be repaired. So my test my over; I went home and went kite surfing the next day instead."

Wurz, who is now chairman of the Grand Prix Drivers' Association (GPDA), is heavily involved in promoting improved safety in F1 and all levels of motor racing.

He is well aware that danger can never be removed, but says that it is important the sport evolves to improve things when issues are highlighted.

"Crashes happen and by its very nature motor sport is dangerous," he explained. "I think everyone who gets in a car accepts that. If not, you had better stop racing.

"But like in the aerospace industry, we have to reduce the probability of crashes. That's why you need proper crisis management and the evolution of designs – which often happens when we face accidents like those suffered by Justin [Wilson] or Jules [Bianchi]."

Wurz is confident that the FIA does everything it can to help drive safety forwards, although you will never get to a point where drivers can be fully happy.

"No one can ever be happy to deal with such things, but we are satisfied with what is going on," he said.

"We urge people to be on it, using their best knowledge, and we definitely support all the efforts for safety.

"The fans shouldn't think we are chickens for wanting safer cars. It's not the case but, through the DNA of F1, if there is a problem thrown at you, you have to solve it: so we can keep racing the fastest cars and not slow them down."

The death of Wilson last month has reignited the debate around closed cockpits, with the FIA set to conduct tests over the next few weeks on new concepts.

Wurz is aware that opinions in the paddock are divided on whether F1 should go down the closed cockpit route, but he says he is personally in favour of the idea.

"I am a fan of the closed cockpit," he said. "But I have to trust the expertise of the researchers.

"I hope that the traditionalists, who are widespread in motorsport, accept that the sport is evolutionary and that we have already come a long, long way to make the cars the safest in the world.

"But we can still do better, which is good for the sport and good for the motoring industry. And if we have closed cockpits, I am sure we can also make sure we keep the coolest and sexiest F1 cars."

Mercedes warns Hamilton title not a given