Adam Burrows and Ray Mason will start their their third season with multiple championship-winning team Compass360 Racing (C360R) at the Roar Before the 24 test days at Daytona International Raceway on January 4th, 2013. And it will be their first time as team-mates. 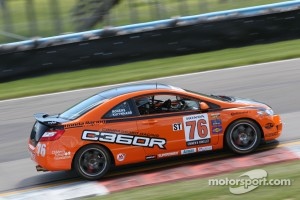 "We're tremendously excited that we've signed Ray and Adam to again drive with us in 2013," remarked Team Principal Karl Thomson. "They've both been with us for a couple of seasons, but they've always driven with other co-drivers. I think that together they'll be able to get our Columbus Truck-sponsored #76 car on the box and fight for the Street Tuner championship."

Indeed, Mason, who's been a long-time sports car competitor in Grand-Am, started his C360R career in the SCCA World Challenge series in 2011. He scored a number of top-five finishes there before moving to the Continental (Tire) Sports Car Challenge squad in 2012.

"I really expected Ryan and I would get on the podium," noted Mason. "We got close a couple of times, but we had some reliability issues the kept us from being in the championship hunt. Now that the car is 100% I think we're in good shape."

Burrows, who notched one of the team's two 2012 podiums with the newly-developed Honda Civic Si, is similarly optimistic.

“I’m happy to be racing with Ray, and to be back with C360R,” said Burrows, who won two races with the team in 2008 on the way to second in the championship. “The team has a long history of success, and we are motivated to deliver strong results next year. I had a lot of fun getting to know Ray last year as teammates, and now I’m looking forward to the opportunity we have as co-drivers. It was great to be back on the podium last year for the team, but with it being a bit of a development year with the Civic, we didn’t get to do it enough!”

We've worked to put three really strong championship-capable driver line-ups together for 2013," noted Thomson. "Having Ray and Adam together in the well-sorted new Coupe is the first part of that campaign."

Compass360 will next be on track during the Roar Before the 24 at Daytona International Speedway, January 4-6, 2013. Fans are welcome to attend the test days.