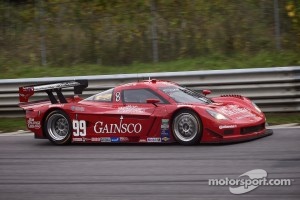 GAINSCO had finished second in the pair of races at Montreal and Mazda Raceway Laguna Seca leading into the Lime Rock finale and ended a challenging 2012 season on a relative high note with the third-place showing. The No. 99 “Red Dragon” ran on pace with the similar Corvette Daytona Prototypes of race winners SunTrust Racing and runner-ups Spirit of Daytona, but GAINSCO’s race strategy ultimately left them just short of challenging for the team’s first victory of the year.

“We ended up a little bit on a different strategy the way the yellows fell,” Gurney said. “We gambled a certain way and it didn’t quite work out, we ended up on pretty old tires at the end of the race, and it is tough to fight that way. I did the last hour and 20 minutes on the same set of tires, it seemed like we were good in the middle and kind of moving forward, but it kind of took the air out of us to do the last bit of the race where we were kind of sliding backwards. We couldn’t quite keep pace with the 10 and the 90 cars over that last 20 minutes or so.”

The season-ending podium streak was part of five total top-three finishes in the year’s 13 races, the season’s best results for the GAINSCO/BobStallingsCars.com team that endured its first winless season since 2006.

“We had a good beginning to the race,” said GAINSCO’s usual opening driver Fogarty, who started the race after qualifying third earlier on Saturday. “It was kind of punctuated by a bunch of yellows here and there so I never really found quite a rhythm, and I think that kind of dictated our strategy. It was a good result for the GAINSCO crew and we had a good strong end to the season. We would have loved to have won one for the crew this weekend, but being on the podium is great, and it was great to see all of these fans here.”

Gurney also left Lime Rock optimistic for the future despite the winless season and enduring, with Fogarty and the GAINSCO/Bob Stallings Racing team, the No. 99’s worst luck in a season in team history.

“We had good pace this weekend in general,” Gurney said. “We struggled here in years past, so we made a big jump, and really we have been pretty quick the last four or five races. We hated that we didn’t get a win, but we had a lot of podiums I guess. We had a pretty strong end of the year, and we are pretty happy with everyone on the GAINSCO team. We had a lot of pace the last few races and I think it bodes well for next year, so in general we are pretty excited.”

GAINSCO and Fogarty did top the Daytona Prototype division this season with a class-leading four pole positions.

“It was tough going without a win this season but it wasn’t for lack of effort on the GAINSCO guys’ part,” Fogarty said. “It was quite a strong end to the year, we had good pace, was able to secure quite a few pole positions and we did run up front. We just never quite put everything together, which is exactly what you have to do, you have to be perfect in order to win one of these. The competition is tough, it’s not like the wins are easy to come by, but that’s how it goes in racing sometimes.”

GAINSCO/Bob Stallings Racing ranked seventh in the final 2012 GRAND-AM Rolex Sports Car Series Daytona Prototype Team Championship standings with 340 points. The five podium results consisted of second-place finishes at Barber Motorsports Park, the Sahlen’s Six Hours of The Glen, Montreal and Mazda Raceway Laguna Seca and today’s third-place showing. The No. 99 team also finished in the top five in seven of the season’s 13 races with a fourth-place at Detroit and fifth in the NASCAR short course race at The Glen along with the podium results.

“I am certainly still proud of the job that we did,” Fogarty said. “There is nothing you can really do about bad luck in a lot of instances, we just try to keep looking forward, and that is what the GAINSCO guys will do heading into 2013 and turn it around.”