Over the past two months Fall-Line Motorsports and Audi Sport customer racing have worked in unison to develop the car. 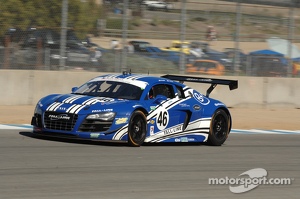 Carter and Sellers drove together for the first time and this driver combination had all the makings for a successful race. However, it was not in the cards and though the drivers drove a good race, the day did not turn out quite as planned.

Carter drove a solid first stint and pitted under yellow at the thirty-minute mark but a problem in the pits as they switched drivers prevented the crew from changing tires. Then, to add to the misfortune, they received a penalty for speeding in the pits and on the 2nd stop they received another penalty for making contact with a tire upon exiting the pits. But, the improvement in speed is obvious and the #46 scored the 3rd fastest lap in the GT race.

Over the past two months Fall-Line Motorsports and Audi Sport customer racing have worked in unison to develop the car. For yesterday's race GRAND-AM allowed the team to install a rear diffuser, which added a little more downforce and stability to the car's rear.

Michael Harvey, Team Manager: "Today was a tough day. We had a fast car, but as a collective team made some fundamental errors that didn't allow us to capitalize on our speed.

I am proud of these guys and our relationship with Audi Sport customer racing for all their work that has allowed us to finish every racing lap. The Audi R8 GRAND-AM is coming alive and the more we get to know her the better the relationship becomes as we know look forward to Lime Rock."

The final round of the GRAND-AM Rolex Series is September 26-28 at Lime Rock Park.

How to become a Number 1 Mechanic in F1 – Qualifications, skills & more