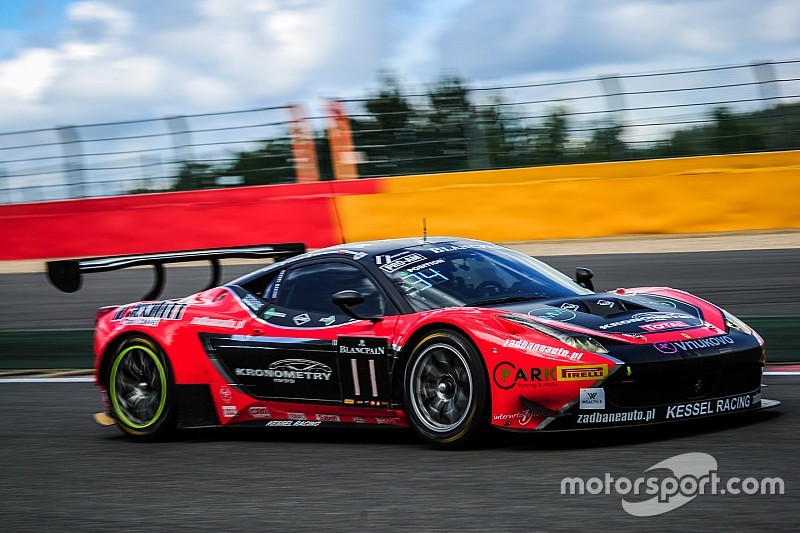 Michael Broniszewski and Kessel Racing will be handed the trophies for the overall 2016 Pro-Am champions at the end-of-year prize giving ceremony.

With just two rounds remaining in the 2016 Blancpain GT Series - one round of the Endurance Cup at the Nürburgring and the season finale at the Sprint Cup race in Barcelona - things are hotting up nicely in the different title fights. But one man and one team are already certain of a championship crown this season: Michael Broniszewski and Kessel Racing will be handed the trophies for the overall 2016 Pro-Am champions at the end-of-year prize giving ceremony.

Broniszewski's and Kessel Racing's titles are obviously closely linked, since the 44-year-old Polish driver entered the 2016 season at the wheel of the Swiss squad's #11 Ferrari 488 GT3. With an impressive start to the season - Broniszewski won the opening three rounds of 2016 - the former bike racer immediately established an important gap in the points standings, a gap which the competition was unable to close during the rest of the season, especially since 'Broni' added two more wins to his tally at Le Castellet and the Nürburgring Sprint meeting.

I started the season without any big expectations,

Not that it was all plain sailing in 2016. The Silverstone round and Total 24 Hours of Spa proved to be a real challenge for the Kessel Racing crew, but thanks to a determined drive the #11 Ferrari still managed a points finish in both events. Since Broniszewski had different team-mates in the Sprint Cup (Giacomo Piccini) and Endurance Cup (Alessandro Bonacini and Andrea Rizzoli) he is the only driver in the Pro-Am category to have scored championship points at every round, resulting in a 62-point lead with two rounds remaining. 2016 has proven to be a very successful year for Michal Broniszewski who was also crowned Blancpain GT Sports Club champion earlier this season.

The title fight in the other overall categories of the 2016 Blancpain GT Series is still wide open. In the overall category 13 drivers still have a theoretical chance of clinching the title. After a miserable Sprint round at the Hungaroring Rob Bell's lead has been reduced to only seven points over AMG-Team HTP Motorsport drivers Maxi Buhk and Dominik Baumann. That means that whatever happens at the Nürburgring Endurance race, the drivers' title fight will go down to the wire at the season finale in Barcelona. HTP Motorsport could conquer the teams' title at their home race however, since the squad enjoys an 18-point lead over Garage 59 with two rounds to go.

In the Am category former team-mates Claudio Sdanewitsch and Stéphane Lemeret are likely to decide among themselves who will end 2016 on top, with Sdanewitsch now having a 10-point lead over the Belgian. 10 other drivers still have a theoretical chance of taking the trophy home.

Michal Broniszewski (2016 Pro-Am Blancpain GT Series champion): "It is a great feeling to have won this title, especially since it was not easy to win it. I started the season without any big expectations, because over the course of a season too many things can happen. I had some good weekends this season, but the nicest one was the Brands Hatch weekend. I competed in both the Blancpain GT Series Sprint Cup and the Blancpain GT Sports Club and at the end of the weekend I had three wins and one second place. A unique result."

Blancpain GT Series Endurance Cup to be decided at the Nürburgring