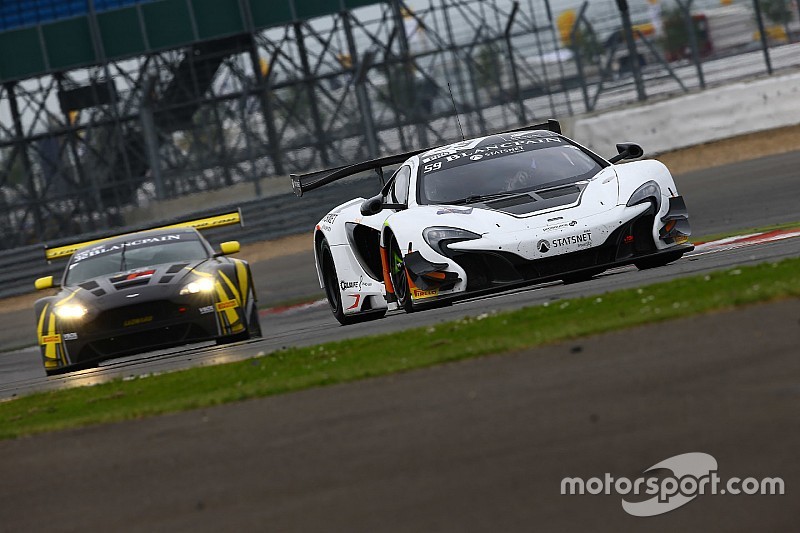 Torrential rain greeted the drivers at the start of the 67th running of the Total 24 Hours of Spa. McLaren-drivers Kevin Estre (#58 Von Ryan) and Alvaro Parente (#59 Von Ryan) lost no time in moving forwards and even managed to pass polesitter Frank Stippler (#2 Audi Sport Team WRT) climbing up to Raidillon.

Others had more difficulties in coping with the conditions: Frederic Vervisch (#75 ISR Audi) spun at Turn 7 and Toni Vilander (#52 AF Corse Ferrari) spun at Bruxelles Turn 8, both were rather innocuous, although the Finn lost five laps before the car could get out of the gravel trap; two further incidents occurred at Les Combes involving first Gilles Duqueine (#90 Duqueine Engineering Ferrari) brought out the first safety-car, and subsequently Karim Ojjeh (#15 Boutsen Ginion BMW) hitting the barriers at the end of the Kemmel straight causing substantial damage and a second, lengthy, safety car intervention.

The second safety car intervention - 45 minutes into the race - gave several of the top runners the opportunity to make their first pitstop and the drivers who decided to stay out managed to gain some positions. At the one hour mark, and still behind safety car, it was the #59 Von Ryan Racing McLaren of Alvaro Parente leading, from the M-Sport Bentleys of Maxime Soulet (#8) and Guy Smith (#7). However; none of those cars had taken their first pitstop.

It was the same story in the Pro-Am Cup: the #47 AF Corse Ferrari took its first pitstop after 67 minutes and held the lead after one hour, ahead of the #44 Oman Racing Team Aston Martin, and the #32 Leonard Motorsport AMR Aston Martin.

In the Am Cup polesitter Benny Simonsen (#24 Team Parker Racing Audi) was still leading after one hour, from the #50 AF Corse Ferrari of Riccardo Ragazzi and the #35 Saintéloc Audi of Philippe Haezebrouck.