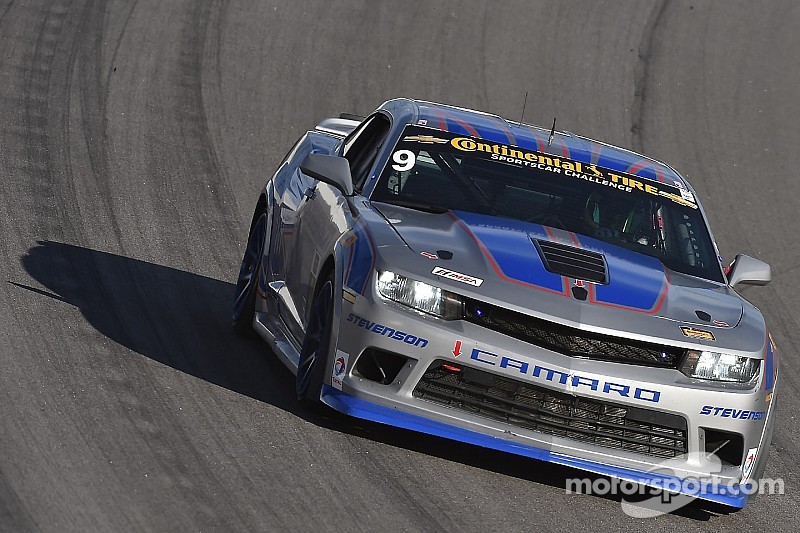 Brickyard pole is Stevenson's second in a row.

Stevenson Motorsports earned a second consecutive Total Lubricants pole on Thursday as Matt Bell posted a fast lap time of 1:34.821-seconds in the No. 9 Stevenson Motorsports Camaro Z/28.R for Friday’s Brickard Grand Prix. Bell will share the driving duties with Andy Lally in the 2.5-hour race at the Indianapolis Motor Speedway.

“You have to get your fast lap in quickly,” said Bell, who marked his time early in the session before taking to the pit lane to wait for the checkered flag. “The Continental Tires are working well here, the track is both slick and abrasive but the car was amazing, they nailed the set up.

The best strategy for qualifying was to get it done as much as we could in two laps. In the race, we would like to hammer down and build a lead early and then save as much of the car and tire as I can before turning it over to Andy (Lally).”

Having won and scored a pole in the last two IMSA Continental Tire SportsCar Challenge races, the brother No. 6  Stevenson Motorsports Camaro Z/28.R of Andrew Davis and Robin Liddell had been looking to continue their run of strong form, but Davis was left frustrated with a seventh place start for the race following the 15-minute qualifying session.

Teammate not happy with his performance

“It was a bit difficult as we had a car with a different balance than what we had experienced before,” said Davis. “So we just missed it a bit, as I had expected we would have a chance to fight for the pole. But we’ll get it right and there should be two strong Stevenson Camaros tomorrow.”

The strong qualifying effort bodes well for the race on Friday (fans can tune in live at imsa.com), but the team knows that nothing counts until the checkered flag waves.

“Last two races, two poles and two wins—things are working well for us,” said team manager Mike Johnson. “This is a track that has been tough to us in the past, and we’ve have had good cars but something happened on the last lap or rain or something, so this is a good start to the weekend. I’m really happy for Matt (Bell). Andrew (Davis) has had him for the past few races so it's good for him to get that confidence back.”