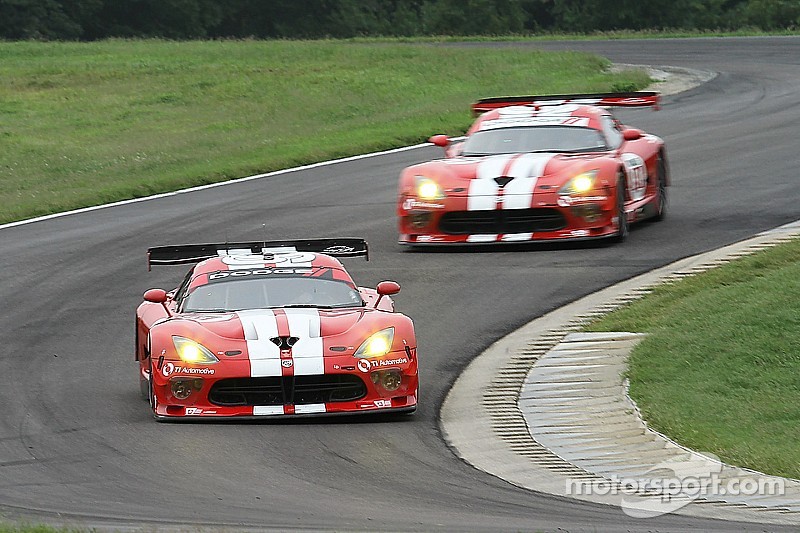 Jonathan Bomarito and Kuno Wittmer overcame a penalty and off-course run through the VIR grass for a fifth-place finish in the No. 93 Viper. Marc Goossens and Dominik Farnbacher each led in the first half of the race and eventually crossed the finish line one spot behind their teammates in sixth place in the No. 91 Viper.

The fifth-place run for the No. 93 - its fifth-consecutive top-five finish this summer - moved both the team and its drivers to within six points of the GTLM class championship leader, which finished seventh on Sunday. Bomarito, Wittmer and the No. 93 team came into the race in second place in the championship eight points back but erased 25 percent of the gap with just two races remaining this season.

The finish was particularly rewarding considering the No. 93 served a drive-through penalty after a questionable call for avoidable contact with a slower GTD-class entry during Wittmer's opening shift. Bomarito later skirted disaster early in his stint when he wheel-hopped off a curb and nose-dived through the grass. Quick work by the SRT Motorsports crew, and a timely caution period shortly thereafter, kept the No. 93 in the race and the championship hunt.

Bomarito passed Goossens for fifth in the race's final hour and the No. 91 served as the No. 93's wingman to the finish. The track position of the Vipers was particularly key in a late-race restart with just six minutes remaining that saw both Goossens and Bomarito stay ahead of any late challenges by the series points leader, who finished seventh.

Farnbacher charged from third to first on the race's opening lap and joined teammate Goossens in leading a race-high 50 laps in the No. 91 Viper. However, the team mistimed a call to the pits during a full-course caution period, which dropped the No. 91 from the top spot. Despite the incident, the teammates continued to race in the lead pack throughout the race.

SRT Motorsports next competes at Texas' Circuit of the Americas on Saturday, Sept. 20 for the 10th and penultimate event of the 2014 season for the IMSA TUDOR's GTLM class. The race can be seen on FOX Sports 1 at 4:00 p.m. EDT.

The season-ending race will be the Petit Le Mans at Road Atlanta on Saturday, Oct. 4.

AIM Autosport on the offensive in a challenging weekend in Virginia