New aero is the work of constant development between Rolex 24 at Daytona and Mobil 1 12 Hours of Sebring.

Los Angeles, Calif. - Duncan Ende, who will drive the no. 09 Lino'spresso USA / RSR Racing Oreca FLM09 with Bruno Junqueira and David Heinemeier Hansson at the Mobil 1 12 Hours of Sebring, has a new trick up his sleeve - or rather, up his balaclava - as he looks for a better result than his team enjoyed at the Rolex 24 at Daytona. 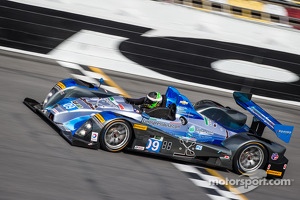 After sporting a clean cut, low-drag setup for Daytona's long straightaways, Ende has developed a new high-downforce setup that is better suited to the bumps and fast corners of Sebring International Raceway's airport circuit.

"With the gap between Daytona and Sebring, I felt I should do something that would help me get an edge on the competition," said Ende. "So I've taken the time to grow out my sideburns as full as ever, and grown out as full of a manstache as I can. I've had to put in some extra work to get it all under my helmet - I thought I was going to have to get a new helmet - but thankfully it has all worked out. Prototype Challenge may be a spec class, but luckily I've found one area where IMSA hasn't imposed any restrictions."

Ende, who captured two Prototype Challenge class wins in the 2013 American Le Mans Series with RSR Racing and Junqueira, is hoping that the Mobil 1 12 Hours of Sebring kick starts his season after his team encountered a mechanical problem in the opening hour of the race at the Rolex 24 at Daytona. Other problems eventually put the team out of the race during the overnight hours, which wasn't the start to the season that Ende was looking for.

"We had really high hopes heading to Daytona, and on paper, we felt we had as good a driver lineup as anyone in the Prototype Challenge class," said Ende. "Unfortunately, something outside of our control put us out of contention very early in the running. So we are already in a hole in the Prototype Challenge championship before our second race, which will be a really tough thing to rebound from. So we'll just have to put our heads down and go battle for race wins from here on out. Luckily, we'll have plenty of Lino'spresso to keep the drivers and the team fueled up during the race."

It was at Sebring last year that a last-minute deal put Ende behind the wheel of the RSR Prototype Challenge car, kicking off the partnership by narrowly missing the podium after a penalty was handed to the team. Ende has one previous podium at the Mobil 1 12 Hours of Sebring, in 2011, in the GT-C class.