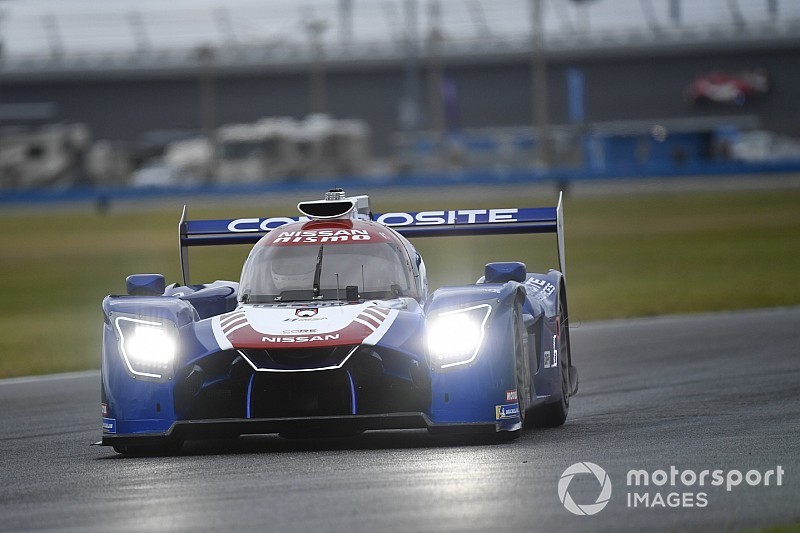 The CORE autosport Nissan squad led Thursday night's third practice session for the Rolex 24 at Daytona thanks to a late flyer by Loic Duval.

That was 0.119s faster than the time set by Filipe Albuquerque in the #5 Action Express Racing Cadillac DPi-V.R.

Acura Team Penske's pair of ARX-05s were third and fourth-fastest, with three-time Indy 500 winner Helio Castroneves setting a time 0.340s slower than Duval in the #7 car. Simon Pagenaud was a further 0.029s back in the #6 machine.

Two more Cadillacs were next up, the #31 AXR car of Pipo Derani and the #85 JDC-Miller Motorsports entry of Tristan Vautier, followed by the best of the LMP2 runners, the #81 DragonSpeed Oreca-Gibson driven by Ben Hanley.

Mazda Team Joest, which claimed pole for the Rolex 24 earlier in the day, sat out the session entirely as it chose to fit new AER engines to its pair of RT24-Ps.

BMW set the pace in GT Le Mans courtesy of Augusto Farfus in the #25 M8 GTE. The Brazilian, who is standing in for BMW IMSA regular Tom Blomqvist this weekend, set a best time of 1m43.315s.

Patrick Pilet was just 0.002s slower in the quicker of the retro-liveried Porsche 911 RSRs, followed by Oliver Gavin in the #4 Corvette C7.R and the two Ford GTs of Scott Dixon and Joey Hand.

That was enough to beat Spirit of Race Ferrari man Daniel Serra by just over a tenth of a second, while Porsche young driver Matt Campbell put Park Place Motorsports' #73 911 GT3-R third in class.

There was one interruption to the session when the #29 Land Motorsport Audi stopped on track with an apparent engine problem with 32 minutes to run, bringing out the red flags.

Crunch time for a motorsport underachiever