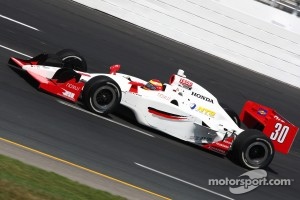 HILLIARD, Ohio (October 11, 2011) – This weekend’s IZOD Indy Car Series World Championships at the Las Vegas Motor Speedway is the swan song for the venerable Indy Car package of Honda power and the Dallara chassis, but as the Rahal Letterman Lanigan duo of Jay Howard (#15 Service Central Honda/Dallara/Firestone) and Pippa Mann (#30 RLL Honda/Dallara/Firestone) know, with 34 cars battling on the 1.5-mile LVMS oval, that swan song is likely to be more like a Metallica concert and less like an opera.

The field will be the largest for an Indy Car race in 14 years and will boast the most starters for an event outside of the Indianapolis 500 since 1983 (Pocono). For Howard, it will be his fourth race of the season with RLL, following promising outings at Indy and Texas, and he expects this one to be memorable.

"I'm really looking forward to having the 34 cars on the track at the same time,” Howard enthused. “The race weekend will be action-packed for the fans and to be behind the wheel for Service Central is an honor. This whole event is going to be second only to the Indy 500. Randy [Bernard] and INDYCAR have really made it into a spectacle and not just another race. I've never raced at Vegas before, but having been at the track in the past, it's going to be really exciting and I'm happy to be apart of it."

Mann returns for her third outing with RLL in the #30 car this season, and she comes off a valuable weekend at Kentucky where she earned 300 priceless miles of experience, and gained seven spots from her grid position. Neither Mann nor Howard have ever competed on the high-banked Vegas oval, but Mann knows that having a stablemate for the finale will pay dividends throughout the weekend.

"The season finale is going to be a great spectacle for race fans so I'm really looking forward to arriving in Las Vegas for this event,” reported Mann. “I've never driven at the track before but with such a wealth of experience at the Rahal Letterman Lanigan team, I'm confident that we'll be able to get up to speed fairly quickly. It's going to be really valuable having Jay Howard as my teammate for this event, and we'll be looking for a strong result to end the year with."

This will be the eighth Indy Car event to be contested at LVMS, but oddly enough, due to the fluctuations caused by the open-wheel split of 1995-2008, Rahal Letterman Lanigan has yet to be part of an event there. But the team has plenty of experience on 1.5-mile ovals, and expects to be competitive.

“We are pleased to have two cars in the 2011 season finale and we feel that both Jay and Pippa will have a great opportunity to show why they should be considered for full-time rides in 2012,” said team co-owner Bobby Rahal. “Indy Car has done a great job creating buzz around this event and we are eagerly anticipating a great race weekend and a fitting cap to a strong racing season for RLL.”

Practice gets underway with one session on Thursday afternoon, followed by practice and qualifying on Friday. The teams will not be on track Saturday, but will have a full day of preparation for Sunday’s 200-lap battle, which can be seen live on ABC. The race will take the green flag at 3:45 Eastern on Sunday afternoon. Fans can follow all of the weekend’s action live as well on www.indycar.com.