Street circuit in Qingdao, China in the works for 2012 season

The IndyCar Series gave a further glimpse of the 2012 season schedule on Thursday by announcing its first visit to mainland China. The series will travel to coastal Qingdao, China to race a temporary 3.87-mile street circuit on Sunday August 19th.

China was the No. 1 place our sponsors wanted to go outside of the United States.

"As the world global economy continues to grow and evolve, China, the world's second-largest economy, has become a top priority with most American businesses and the sponsors that are committed to Indycar," said Randy Bernard, Chief Executive Officer of IndyCar.

Qingdao is located on the Yellow Sea between Beijing and Shanghai and is home to 8.7 million people. The city hosted the 2008 Summer Olympics Sailing competition. Qingdao is very European as the city was influenced by Germany and Switzerland.

"The China automotive industry is experiencing explosive growth and it is just smart to begin establishing our brand and business roots in the China marketplace," said Terry Angstadt, Indycar's Commercial Division President. "We couldn't be happier for the future Chinese race fans and the extended Indycar family." 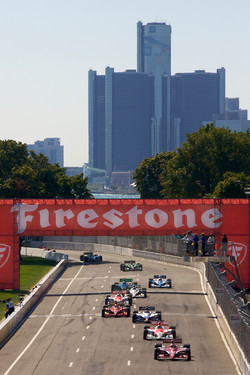 The event in Qingdao complements two other venues that return to the series calendar for 2012: the Detroit Belle Isle Grand Prix on Sunday, June 3rd, and the Auto Club Speedway oval in Fontana, Calif., for a race under the lights Saturday, September 15th.

Bernard said, "Last year, at our sponsorship summit, China was the No. 1 place our sponsors wanted to go outside of the United States.

The plan is long term, including a permanent road course for the future.

The Indianapolis 500 is scheduled for Sunday, May 27th, with Pole Day on Saturday, May 19th.

Will Power cleared to drive, will test new engine next week