Flying Lizard No. 79 fourth in GTE Am at Le Mans

No. 80 Retired in Hour 10 After Accident

Circuit de la Sarthe, Le Mans, France – The 24 Heures du Mans proved again to be a long, difficult race for both Lizard Porsches. The No. 79 finished fourth in GTE Am but the No. 80 (competing in GTE Pro) was retired in hour 10 after battling multiple suspension issues and then, finally, an accident at the first chicane. 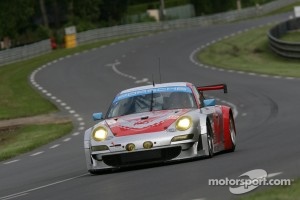 In the No. 79, Porsche factory driver and French national Patrick Pilet started on the GTE Am pole. It was a clean start for the whole field, and although the No. 79 moved to second position at the start, Pilet soon regained the lead, which he held for his double stint. Near the two-hour mark, Spencer Pumpelly took over, maintaining the lead for his double stint.

At hour four, Pumpelly handed the wheel over to Seth Neiman. Neiman had an uneventful stint until the end, when, on his inlap, the car spun at the exit of Indianapolis, travelling across the track into the guardrail. After a lengthy garage repair to replace the front radiators, front and rear bodywork, exhaust, oil lines and undertray, the No. 79 returned to the track, now in eleventh place and 15 laps down on the GTE Am leader.

It was an uneventful (but very chilly) night for the No. 79 as Patrick Pilet and Spencer Pumpelly moved through their stints. At the race halfway point, the crew had to replace a cross-threaded wheel nut on the left rear which required a longer than normal pit stop. By morning, the No. 79 was back to sixth position with eight hours left to go in the race.

Over the final eight hours, all three drivers cycled through their lineup, encountering relatively few problems and setting a fast pace. In hour 18, Patrick Pilet set the fastest GTE Am time of the race and beat his own pole with a lap of 3:56.596. By race end, the No. 79 had climbed back to fourth position.

The No. 80 was dogged with bad luck from the start. In the No. 80, Joerg Bergmeister started seventh on the GTE Pro grid. By the one-hour mark, after working through early-race tire pressure issues, he had moved to up to sixth in class. He was settling into his race pace when he had an off-course excursion into the gravel trap at Indianapolis. He was quickly pulled out and back underway, but pitted immediately for the crew to look over the car and a driver change to Patrick Long.

Twenty minutes later, a damper came apart which sent Long limping slowly around the track back to the pits. (The damper was most likely the reason for Bergmeister's earlier off.) The crew quickly replaced the damper but the garage stop cost the car several laps to the GTE Pro leader. Long headed out again, now in ninth position. Near the three-hour mark, halfway through his double stint, a tire puncture sent him back into the pits for a replacement left rear tire. At hour four, he turned the wheel over to Marco Holzer. Thirty minutes into his stint, Holzer returned to the pits for the crew to replace another damper, then just past the five-hour mark, Holzer pitted again to change a third. The No. 80 returned to the race in P9, 10 laps down on the GTE Pro leader. Bergmeister then took the wheel for his stint, and turned the No. 80 over to Patrick Long around midnight, still in P9.

Just after midnight, Long hit heavy gravel on track in the first chicane. The debris was from another car, which had just spun into the gravel trap, then drove across the track and covered it with gravel. Long hit the gravel, spun and impacted the tire wall. He was fine, but the car sustained heavy damage and he was unable to drive it safely back to the garage and the car was retired.

Spencer Pumpelly, No. 79: "I feel extremely fortunate to have been a part of this. Everyone on the Lizard team put in a phenomenal effort, not only in this 24-hour race, but for the entire program leading up to the race week. The car ran flawlessly and it was a joy to drive. A huge thanks to everyone on the team."

Joerg Bergmeister, No. 80: "It was a very disappointing weekend for the No. 80 drivers, and even more so for the crew who had put so much time and effort work into preparing the car. And with all of the suspension issues that we had during the race, the crew kept repairing it and putting a solid car back on track. After the last damper was replaced, the car actually felt pretty good and we were running a reasonable pace. Patrick was unlucky: he was in the wrong place at the wrong time and that was the end of our 2012 Le Mans."

Marco Holzer, No. 80: "That was a rough one. We had so many issues, but the crew was so quick to repair everything and get us back out. Then we had to retire. It was definitely frustrating, but it was good to have the opportunity to be here with the Lizards."

Patrick Long, No. 80: "Congratulations to the 79 team: I know from experience that going from the top to the bottom of the running order can really get into your head. But the crew as always never missed a beat and the drivers fought through the night knowing that a win was unlikely, but they pushed to the end. I only wish we could have had the opportunity to do the same in the No. 80. Coming up on the exit of a corner on a pitch black racetrack and hitting gravel, debris and fluid full throttle meant that I was just a passenger. But that's Le Mans – what might otherwise have been just two wheels off, on this track at those speeds and it can be game over. Now our focus has to shift immediately to Lime Rock and the rest of our ALMS season."