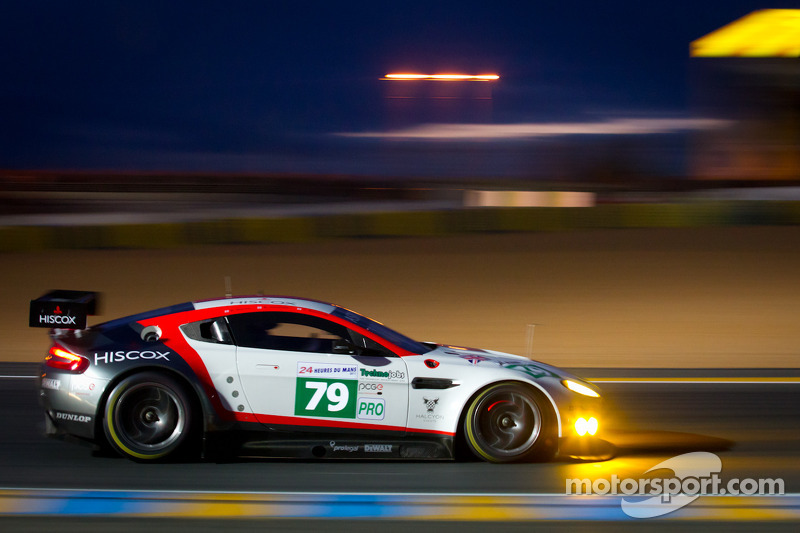 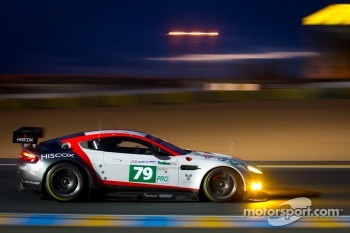 For a second straight day the #79 Aston Martin GT2 Vantage performed consistently throughout both two-hour sessions in which Simon Dolan, Sam Hancock and Chris Buncombe all completed their mandatory night time laps.

It was Hancock’s impressive 4m00.747s effort from Wednesday evening’s first timed session however that was carried forward to the final aggregate qualifying standings in a fiercely competitive GTE Pro class. Over a 13.6kms lap that was just 3.155secs shy of the pole-winning BMW which continued to chase fast times on Thursday.

The British squad, making their fifth appearance at Le Mans but debut as an AMR partner team, hit the track for the first time on Wednesday with four hours of practice followed by the opening two-hour qualifying session, during which Dolan sampled his first competitive laps of the daunting part-public road, part-purpose built French circuit.

With fresh engine, gearbox and bodywork installed ahead of Thursday’s running, the team spent the second and third sessions refining race set-up, but still managed to come within 0.2 seconds of beating Wednesday’s personal best lap.

Simon Dolan: “I only set two timed laps during the day but they were three seconds quicker than I managed at the Test Day and during practice and felt really good. Quality rather than quantity! The car also feels a lot more comfortable and easier to drive. It’s always improving but if we started the race now I’d be perfectly happy.”

Qualifying is always difficult to judge at Le Mans...

Sam Hancock: “It’s been a good couple of days. The car has performed fantastically and to get down to the four-minute mark straight away without really pushing was a nice surprise. But equally I’m a bit disappointed as I had a chance to improve by at least six tenths last night even though we were concentrating on set-up rather than outright pace. Perhaps it wouldn’t have made a difference to our grid position but it’s always good to get the maximum out of the car. Having said that we’ve put more effort into race pace than ultimate qualifying speed so I’m hopeful we’ll see the benefit come Saturday.”

Chris Buncombe: “I’m happy with the progress we made yesterday evening and confident we now have a good car in race trim. Thursday was all about getting more mileage under our belts, improving the balance and finding a comfortable set-up ahead of Saturday. Our pace was good though, especially considering the scale of opposition we’re up against in the class. I think we’re well set for Saturday.”

Sam Hignett, Team Principal: “We’re in good shape set-up wise which is down to the team in the garage and Aston Martin Racing who have worked very hard delivering updates since the last Le Mans Series round at Spa. Qualifying is always difficult to judge at Le Mans as you need to push to set competitive times whilst being mindful of protecting the car. The guys managed that perfectly, which in Simon’s case is especially impressive given that it was his first time.”

With Friday given over to the event’s traditional Drivers’ Parade in Le Mans town centre, the team next return to the track at 9am on Saturday for the 45-minute warm-up, before the 79th Le Mans 24 Hours gets underway at 3pm local time.