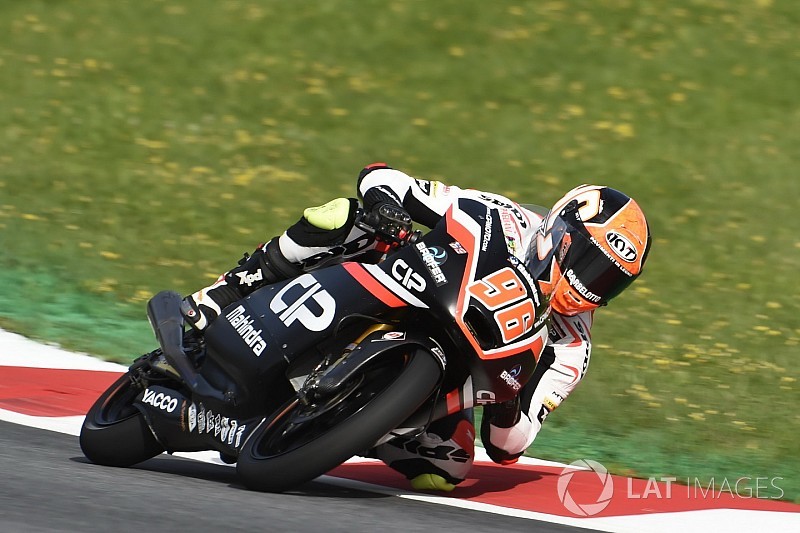 Mahindra had braced itself for a difficult outing at the Red Bull Ring before arriving at the Austrian venue, according to the Indian manufacturer's chief Mufaddal Choonia.

The Spielberg circuit comprises of long straights and acceleration zones, placing an emphasis on a strong engine over cornering ability of the bike.

The nature of the track exposed the weaknesses of the MGP30, leaving the Mahindra riders with an uphill task to finish inside the points.

CIP's Manuel Pagliani came closest to a top-15 result, crossing the chequered flag in 19th position with a strong ride from 30th on the grid.

“I gave my best for the entire race, from the first lap right until I crossed the line at the end,” the Italian commented after the race. “I was 100% on the limit but able to overtake many riders throughout the race. It was a tough race but a great battle in a big group.

“I was able to lead the group at many points and I did my best laps then. I’m happy to be the first Mahindra, it’s maybe my best race of the year. Now we focus on closing the gap to the front.”

Choonia conceded that Austria was always going to be one of the toughest races of the year, but is eagerly awaiting those circuits which are more suitable to the Mahindra bike.

“This was always going to be a difficult race, at a track where our bike’s strong point of sweet handling and fast cornering was less important than simple acceleration,” he said.

“It is not a subtle circuit. Once again, the penalty of poor qualifying was clear, but it was good to see our own riders and the independent Mahindra teamsters fighting hard anyway.

“We’re now looking forward to some tracks where our strengths will bring us back to fight for more championship points.”

Mahindra’s Austria outing was made tougher by accidents for the factory-supported Aspar riders, who had both qualified inside the top 20.

Lorenzo Dalla Porta was steadily running in 16th place when he was taken out by a rival rider on lap 3, while Albert Arenas made contact on the final lap.

“I was knocked off by another rider on the third lap, between the last two corners,” Dalla Porta said. “It is a shame because we could have scored points here – the bike was going pretty well and I felt ready.

“I was going for it, I was excited and I think it would have been possible. I feel very bad.”

Arenas added: “On the last lap I tried to pass another rider in the tight section, we touched and I crashed, and then as a consequence he crashed too.

“We knew there would be a big group at the start today and I tried to be as far forward as possible when it broke. In the end it was impossible to keep pace with the guys at the front so now we just have to look ahead to the next race.”