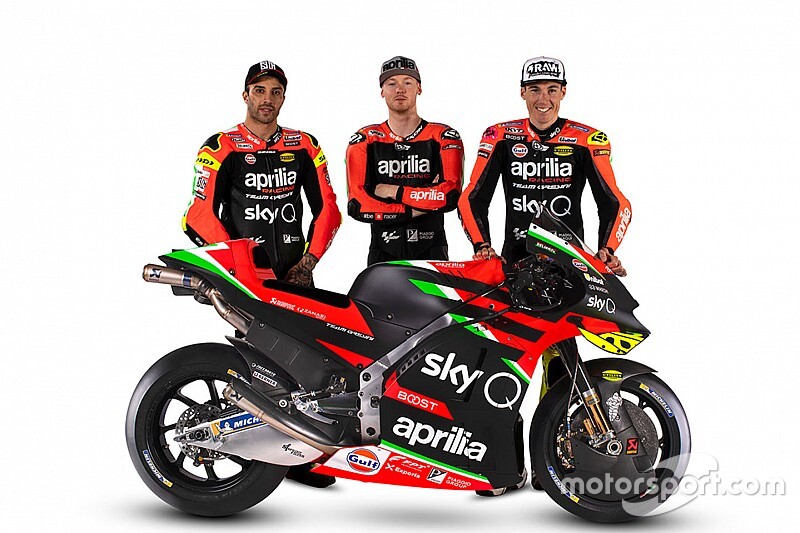 The Aprilia Racing Gresini team became the final MotoGP manufacturer to unveil the colours its bikes will sport during the 2020 season.

This season will be Aprilia's sixth since it returned to MotoGP in 2015 with a works effort in conjunction with Fausto Gresini's satellite team.

Aprilia is due to field Aleix Espargaro and Andrea Iannone again this year, though the latter is currently suspended by MotoGP's governing body for a doping infringement – something both he and Aprilia are adamant he did not commit.

A decision on Iannone's case was expected last week, but so far he remains in limbo and will not be present at this week's final pre-season test in Qatar.

Test rider Bradley Smith will be present at the test and will take over from Iannone – who was involved in the livery launch - at the first race should he be unable to compete.

Pulling the wraps off of its colours in Qatar a day before testing gets underway, Aprilia revealed a livery largely similar to what it ran last year.

Aprilia's 2020 RS-GP has been described as a "revolution" by the marque, with the bike making an impressive on-track debut at the Sepang test a fortnight ago.

Espargaro finished 10th overall, 0.345 seconds off the pace, and put in an encouraging 12-lap long run on the final day at Sepang of consistent mid-1m59s laps.

The Spaniard admits the RS-GP is still missing out on acceleration relative to its rivals, and reliability remains a question mark – with the latter the main focus for Aprilia in the Qatar test.