A year ago on May 16, we lost Dick Trickle 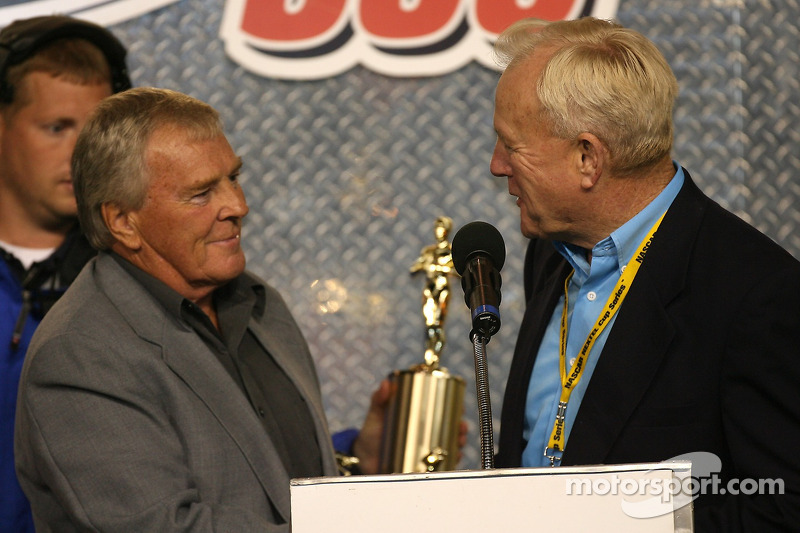 But fans and friends can't forget him, as they plan a new memorial in his home town

Sure, Dick Trickle would say, it’s nice that back home in Wisconsin his old friends and fans are building him a memorial. But might that money not have been spent better on a few kegs of beer and a big party?

One year ago – May 16, 2013 – Trickle, a retired race car driver who won the NASCAR Rookie of the Year title in 1989 at age 48, drove his Ford pickup to a graveyard in a small community in North Carolina, where his granddaughter, killed in a car crash, was buried.

Trickle (in photo, on the left receiving an award from old friend, promoter Humpy Wheeler) called 911 from his cell phone.

“Are you there?” the dispatcher asked.

She asked him to wait for help, but he hung up, and shot himself. He was 71.

A rugged, compact, self-reliant little guy who took no crap from anyone, Trickle finally faced one obstacle that defeated him: A phantom pain in his chest that would cause him to double him over in agony. But no doctor could find it, therefore no doctor could treat it. He had even given up smoking, tough for the driver known for lighting up in his race car during caution flags.

Though he won over 1,000 short-track races – some very prestigious, defeating a bunch of drivers who became far better-known -- Trickle never won a points-paying NASCAR Cup race (he did win the Winston Open in 1990), but he did get in inordinate amount of coverage on TV, especially ESPN’s Sport Center, where Keith Olbermann and Dan Patrick could seldom get through a NASCAR race report without noting the finishing spot of Dick Trickle, because they loved that name.

Plenty of people loved the guy, too. Few drivers have ever been more fan-friendly. He was a favorite in the media center, too – at least until no-smoking policies kept him outside, though with Winston Cup the name of the series, that happened pretty gradually. His hoarse squawk of a voice and quick laugh helped earn him a fan following that continues, as suggested by the Dick Trickle Memorial Facebook page, which had, at last look, 2,045 members.

That Facebook page is where his fans and friends can donate to build the memorial. According to a story in his hometown Wisconsin Rapids newspaper, they will build a bronze statue of him in a local park.

Says the story: “An event launching the project is set for noon to 6 p.m. Sunday at the Rudolph Community Park, with a groundbreaking at 3 p.m. The event will include music by the Roy Fuller Band, auctions, food and Dick Trickle memorial buttons.”

If I was close, I’d go. Dick Trickle was one of the last NASCAR cowboys, and not just because he often wore cowboys boots. He would never be the spit-polished, media-trained personality NASCAR embraces now – he was just a guy who loved to race, was exceptionally good at it, and managed to make it to stock car racing’s highest level, almost in spite of himself.