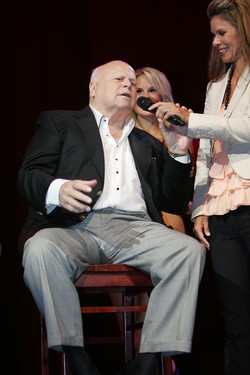 "We still have lots to do," said Smith, who is 84-years young. "My best time in racing is today and tomorrow.

Smith regaled the audience with tales of his adventures flying with driver and friend Curtis Turner, and he spoke about his desire to improve the race-going experience for his customers.

"I always enjoy talking to the race fans," Smith said. "You learn a lot about this business by listening to fans and hearing their thoughts."

In addition, seven industry companies (listed below) were awarded for their 2011 accomplishments and positive impacts to the Motorsports Industry. The night began with a cocktail reception and was capped off with a desert reception both provided by Dixon Hughes Goodman, LLP.