NASCAR's favorite son, Dale Earnhardt, Jr., has been fined $10,000 and docked 25 driver and owner points after an intentional spin at Bristol Motor Speedway. A lug nut problem caused Earnhardt to begin sliding backwards through the field at lap ...

NASCAR's favorite son, Dale Earnhardt, Jr., has been fined $10,000 and docked 25 driver and owner points after an intentional spin at Bristol Motor Speedway. A lug nut problem caused Earnhardt to begin sliding backwards through the field at lap 417, and the No. 8 Chevy then spun at lap 430 bringing out a caution. 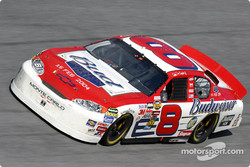 Dale Earnhardt Jr..
Photo by Eric Gilbert.
Earnhardt then joked with his crew chief Tony Eury, Sr. about having caused the spin on purpose, he also later joked with the media post-race. The intentional spin was in violation of Section 12-4-A (Actions detrimental to stock car racing) and 12-4-N (Any driver who, in the judgment of NASCAR officials, intentionally causes or attempts to cause a caution condition by stopping or spinning out or any other action) of the NASCAR NEXTEL Cup Series Rule Book.

"The driver of the No. 8 car was quite vocal in admitting he intentionally spun out his car to cause a caution condition on the track, which is clearly prohibited in the NASCAR Rule Book," NASCAR President Mike Helton said. "We have several rules in our Rule Book that have been in place for quite some time to prevent someone from altering the outcome of an event. This was a clear-cut case of that. Actions such as this will not be tolerated. We will always react to protect the integrity of our sport."

Earnhardt's rankings will be adjusted to 832 points, but remains third in overall scoring.

Dale Earnhardt, Jr. was traveling and could not be reached for comment.

Germany MotoGP win "makes up for the suffering" - Marquez

Germany MotoGP win "makes up for the suffering" - Marquez