Kevin Harvick is making a strong case to prove that the 2003 Winston Cup championship is not a one-horse race. Since the Dodge/Save Mart 350 at Infineon Raceway in June, Harvick has charged from 11th to third in the Winston Cup point standings.

Kevin Harvick is making a strong case to prove that the 2003 Winston Cup championship is not a one-horse race.

Since the Dodge/Save Mart 350 at Infineon Raceway in June, Harvick has charged from 11th to third in the Winston Cup point standings. The 27-year-old California native has a win and seven top-5 finishes during that 11-race stretch.

He trails Dale Earnhardt Jr. by 23 points and Matt Kenseth by 441 but the third year driver refuses to give up on his championship quest. 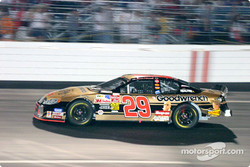 Kevin Harvick.
Photo by Greg Gage.
"It's not over," says Harvick, who won the Busch series championship in 2001. "It's a long shot to win it, but we've been a long shot before and overcome the odds and done things they said we couldn't do."

The #29 GM Goodwrench Service team posted five consecutive top-5 finishes and was running at the front of the pack last week at Richmond before contact with Ricky Rudd dropped him back to 16th. Harvick parked his car beside Rudd during the post-race ceremonies and climbed onto the hood of Rudd's car in an attempt to voice his displeasure.

The incident earned Harvick a $35,000 fine and probation for the rest of the season. Five members of his crew received similar sanctions for their part in the incident.

"Emotions run high in this sport," Harvick explained. "Needless to say, mine were running very high after last Saturday night's race. I felt like we had a strong finish in our run for the Winston Cup championship taken away for no reason."

For Harvick to close the gap on Kenseth, he needs to continue to run at the front of the pack and is looking forward to another strong run in the Sylvania 300 at New Hampshire International Speedway on Sunday (12:30 p.m. ET on TNT). He was runner-up to Jimmie Johnson in the spring race at the 1.058-mile flat oval.

"I think we have a great chance of winning in Loudon," says Harvick, who has three top-10 finishes in five career starts at New Hampshire. "The nice thing is that when you go to a racetrack and feel like you had an opportunity to win there, you have a lot of confidence going back."

Harvick had a phenomenal rookie season two years ago, winning two races and finishing ninth in the point standings after filling the seat for Dale Earnhardt Sr., who was killed in the season-opening race at Daytona. But Harvick suffered through a horrendous sophomore slump in 2002, plummeting to 21st in the series points and earning a one-race suspension for an on-track incident in the Craftsman Truck Series.

Harvick is happy to be back in the hunt for the championship and needs another strong finish at New Hampshire to make up ground on Kenseth.

"It's a lot of fun to be in the racecars right now," says Harvick, who won the Brickyard 400 at Indianapolis in August and has three Busch series wins this season. "I just get in and drive them and do everything I can (to win) because I know this team is doing everything they can."