Watkins Glen, N. Y. – For the second week in a row, Juan Pablo Montoya zoomed to the pole position for a NASCAR Sprint Cup Series race, doing it this weekend on the legendary road course at Watkins Glen International. And he smoothly zipped around the 2.45-mile course at a record speed of 127.020 miles per hour.

Kyle Busch set the previous standard of 126.421 mph a year ago, and the top five qualifiers exceeded his speed.

You just have to run your own race and save the brakes.

Montoya, the 2010 winner of the Finger Lakes 355, earned his ninth career pole and scored for the first time on the Glen’s famed road course. He was driving the Target Chevrolet.

“I thought the lap was really good, although you always make mistakes here and there,” Montoya said. “It is never perfect. You always think, ‘I went too far here and too far there,’ but it is how well you put it all together, and I think we did pretty well there. Everyone in the Target Chevrolet organization has been working well together, and I think it is beginning to pay off.

“Tomorrow, we are looking more for consistency than for ultimate speed. We had an oil leak this morning, and we lost a half-hour of practice. At the end, we put it in qualifying trim to get an idea how the car was going to do, and it was quick. Lately, I can push the car more, not just driving it around.”

Regarding Sunday’s race, he added, “I think we can contend. A few guys are really strong. You just have to run your own race and save the brakes. It took me a couple of years here to learn how to use the brakes here. Run hard early and you don’t have any brakes later on. Having track position is a good thing and you have to be smart and see what it brings you.”

“I think our lap was really, really good, and the car drove well, although I got loose in a couple of corners,” he said. “At least, we can see the front and will get a good pit stall. And for us, it is win or bust for the next few races. Second, third or fourth won’t get us into the Chase.”

Jimmie Johnson pushed his Lowe’s Cortez Silver Chevrolet into the third slot at 126.925 mph with Brad Keselowski grabbed the fourth starting position with a speed of 126.626 mph in the Miller Lite Dodge. 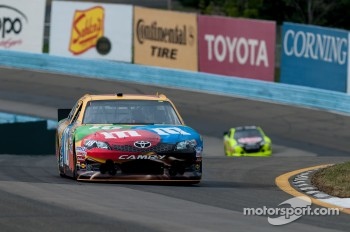 Travis Kvapil crashed during qualifications and will start 42nd using owner points. Patrick Long had the slowest qualifying speed and will start last in the 43-car field.

ESPN will telecast the 26th annual Finger Lakes 355 at the Glen on Sunday at 1 p.m. ET.

The playoff picture has changed dramatically as NASCAR announces penalties to William Byron, as well as Ty Gibbs following the Cup race at Texas Motor Speedway.

Kurt Busch "hopeful" but still unsure of when he'll return

Kurt Busch has been sidelined since a qualifying crash at Pocono Raceway on July 23rd, forfeiting his spot in the playoffs as he battled concussion-like symptoms.

At Texas Motor Speedway, at least half of the 16 cautions in the NASCAR Cup Series race were the result of blown tires.

NASCAR admits missing Byron/Hamlin clash under caution, but will review it