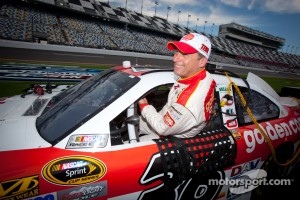 TBR AT BRISTOL – Blaney made the team’s sole start at BMS this season in the spring race. He started 37th and finished 25th.

BLANEY AT BRISTOL – Blaney will attempt to make his 21st start at BMS this weekend. The Buckeye Bullet has five top-five and eight top-10 starts, including two top-eight starts in 2007 with Bill Davis Racing while Tommy Baldwin was the crew chief. His best start of second came in the spring race in 2005. He collected his best finish of 14th in the fall of 2006.

CHASSIS NO. 802 – Blaney will pilot chassis No. 802, which he drove at Bristol, Phoenix and Vegas. The team also ran this chassis in the 2010 NSCS season finale at Homestead-Miami Speedway.

LAST RACE RECAP: PURE MICHIGAN 400 – Blaney drove the No. 36 Accell Construction Chevrolet to the 34th starting position in the Pure Michigan 400. After struggling with handling, a pit road mistake and running out of fuel, the Tommy Baldwin Racing (TBR) team brought home a 33rd-place finish.

IN THE POINTS – Last week’s 33rd-place finish at Michigan kept the No. 36 team in the 32nd position in the NSCS Owner Points, 74 points behind the No. 34 in 31st. The TBR team is now 60 points ahead of the 36th position and locked into the top-35. Blaney also held onto the 32nd position in NSCS Driver Owner Points. He is nine points behind Casey Mears in 31st and 27 points ahead of Andy Lally in 33rd.

ON THE RACING AT BRISTOL – “Bristol is always exciting. I really like the track since they repaved it. Since then, we qualified really well. We had a pretty good car in the spring and finished well after starting from the rear of the field. Tommy and I had one race back at Bill Davis Racing in the Caterpillar car that we were running really well but got tore up. I’m excited to get there and fight for a top-10 finish.”

ON BRISTOL MOTOR SPEEDWAY – “I always love racing at Bristol. It’s the most exciting race of the year, racing at Bristol in a night race. The race reminds you that the season’s coming to an end, and it is one of the races you always look forward to."

More from
Casey Mears
Other truck

Ty Dillon set to move up to Cup in 2017, replacing Casey Mears