On the heels of winning his first career race at Homestead Miami Speedway, Kasey Kahne has become the next big thing. Speculation in the garage for months has been that Busch series star Kasey Kahne was being spied as a future Nextel Cup ...

On the heels of winning his first career race at Homestead Miami Speedway, Kasey Kahne has become the next big thing. Speculation in the garage for months has been that Busch series star Kasey Kahne was being spied as a future Nextel Cup competitor. 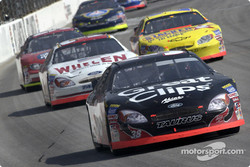 Kasey Kahne.
Photo by Autostock.
Ford and Dodge have reportedly been locked in a battle over Kahne's contract, which will determine who will bring the 23-year-old through the ranks to NASCAR's elite series. In October, Greg Specht, Manager of North American Racing Operations for Ford Racing confirmed that they expected Kahne to continue in the Ford stable of drivers.

"I've been hearing a lot of speculation around Kasey's status and, as far as Ford Racing is concerned, we have a multi-year contract in place with him and we intend on honoring that," stated Specht. "We feel Kasey Kahne is a future star in this sport. That's why we went ahead and signed him to a multi-year contract. We're flattered that other teams and manufacturers are interested in him because that means we must know how to evaluate promising young talent.

"We've developed a plan for Kasey, along with Robert Yates Racing, and that includes having him run a full Busch Series schedule next season because we feel he's primed for a run at the championship. In addition, he would compete in seven Nextel Cup events for RYR with the plan being that he would run a full-time series schedule in 2005."

Sources, however, say that Dodge has offered to buy Kahne out of his contract with Ford and enter him into a Dodge development program with Evernham Motorsports. As the rumors heat up as to whether he will affiliate with Evernham, Kahne is trying to stay focused on his career.

"I knew this would come up sooner or later," said Kahne. "Really, when I'm in the race car, even thinking about racing, I don't think about all of that other stuff. The only thing when I was leading, that was probably the longest 20 laps of my rain career. I was just really focusing on hitting my marks and running as fast of a lap as I could every lap and we were running pretty consistent." 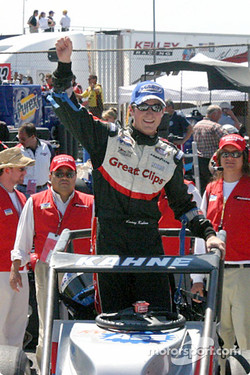 Kasey Kahne heads into victory lane.
Photo by Greg Gage.
Kahne is used to being groomed for success by the elite level of scouts in the sport of racing. When Kahne, a Washington native, was racing sprint cars, he was recruited by Steve Lewis to run the USAC Silver Crown series.

Lewis has been responsible for having helped kick-start the careers of Tony Stewart and Jeff Gordon.

In Kahne's first year of USAC, he garnered Rookie of the year, both USAC Midget championships and the Driver of the year title.

Ford recognized the talents of Kahne, signing him to a development deal and giving him the choice of what he wanted to drive. Special test sessions were set up for him to drive Bobby Rahal's CART car, and a Busch car at ppc Racing. Ultimately, after a brief stint in the open wheel platforms of the Toyota Atlantic series and Formula Ford Kahne chose stock cars, securing a limited schedule with Robert Yates in the 2002 Busch series.

In 2003, Ford provided funding and support for Akins Motorsports, as Kahne moved to the No. 38 Ford full time.

With his first win of his career added to his resume, it confirms what many people already believed. Kahne has a raw talent for driving a stock car, and with some seasoning he is going to be a threat for a future Nextel Cup championship.

Sources say that Kahne will run a full season of Busch in 2004, but is being primed to take over the ride of a "retirement ready" Cup series veteran.

Whatever is to be, it seems that not even Kahne is exactly sure where he will end up next year, "My situation, I really don't know now. Seriously, I wish I knew more. It's been the same thing I've been saying for the last month and a half, and it's kinda getting old. I wish I knew exactly what I was doing but I don't."

NASCAR: Next Gen cost savings won't be apparent in 2022