It was a thrilling finish to Saturday's NASCAR Xfinity Series race at Pocono Raceway with Cole Custer taking the checkered flag for Stewart-Haas Racing. 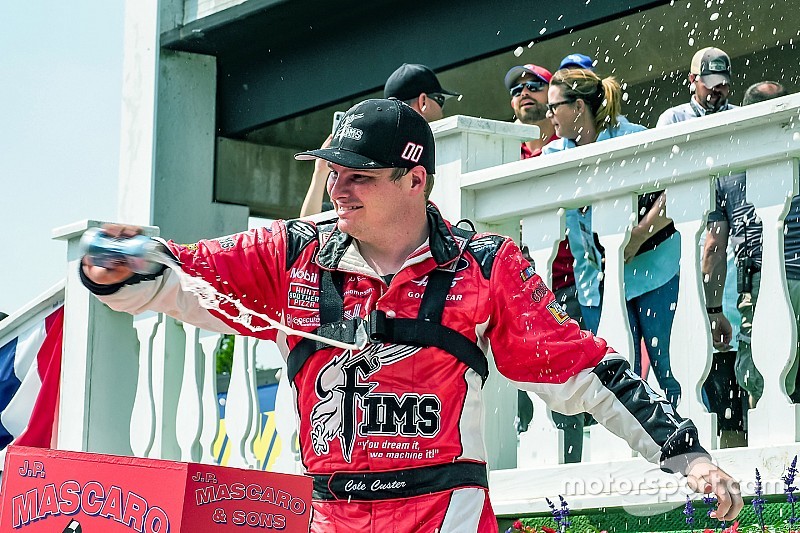 In NASCAR Overtime, Cole Custer and Tyler Reddick traded the lead twice in the final two laps in a tense battle for the Xfinity Series win.

Reddick was able to cut under Custer and steal away the lead entering Turn 1 on the restart, holding the position until the white flag. While serpentining down the frontstretch, the RCR driver actually touched the outside wall while trying to hold back Custer.

Although it appeared the win was nearly in hand, Reddick overdrove the final corner and slipped up the track. Custer was able to slide underneath him and reclaim the lead just shy of the finish line, taking his third win of the season and fifth of his career.

"It was pretty unbelievable," said Custer. Tyler (Reddick) gave me a real run for my money there. I have no idea how he made it stick on that restart on the bottom passing me but he did. He was unbelievable on the brakes at the end. I was just able to kind of force a mistake a little bit trying to pack air on him. It was a fun end of the race. I wish I didn’t have to do it like that, but it probably made it exciting."

"We were so good at the beginning of this race," said Reddick. "Even out front in clean air, I was just too tight to really hold the bottom that well.I probably could have held the bottom better -- I'm not going to lie to you -- just thought it was going to be really tight going into three so I put some rear brake into it and I just got loose and pretty much gave it right back to him there."

The final stage began on Lap 56 with Austin Cindric out front before being quickly overtaken by Custer and Justin Allgaier. Custer was able to solidify his position in the lead through a late round of green-flag pit stops where Allgaier overshot his pit stall and Reddick was penalized for a tire violation. As the laps ticked away, Custer's lead rose to over nine seconds until contact between Cindric and Jeffrey Earnhardt forced a caution with seven laps to go.

The race resumed with three laps to go only to quickly return to yellow when Allgaier spun in front of the pack in Turn 1. This, the seventh and final yellow of the event forced the race into overtime and set-up the two-lap shootout.

Custer led the race from the get-go and remained unchallenged through the early portion. Brandon Jones was the first incident of the race, spinning into the Turn 2 wall while running fourth, ending his day. Another incident followed the ensuing restart with Chad Finchum, Joey Gase and Todd Peck involved.

With ten laps remaining in the stage, Bell went spinning but narrowly avoided impacting the inside wall on the backstretch. Despite the early yellows and multiple hectic restarts, Custer was able to come away with the Stage 1 win ahead of Allgaier, Reddick, Austin Dillon, Cindric, Justin Haley, Ross Chastain, Ryan Sieg, John-Hunter Nemechek and Noah Gragson.

Nemechek and Earnhardt were the front row at the start of the second stage, as they and several others stayed out. Custer now found himself back in eighth but quickly made his way through the field. Bell took the lead on the restart with a three-wide move to the outside of Nemechek and Earnhardt.

Eventually, Allgaier and Reddick would find their way to the front and battle for the stage win with Allgaier prevailing. Bell placed third, followed by Custer and Annett.

Niki Lauda remembered: All 25 of his F1 wins

Cindric on early damage at Daytona: ‘Salvaged a great day out of it’

Niki Lauda remembered: All 25 of his F1 wins