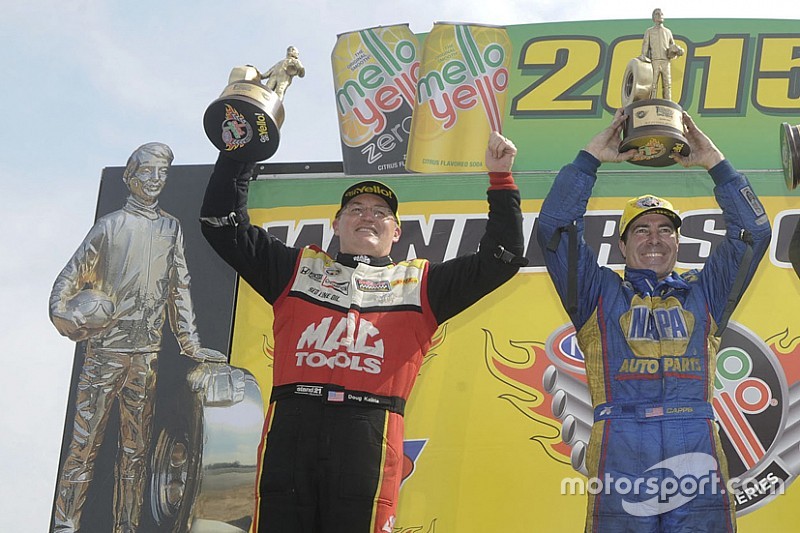 Kalitta began the six-race Countdown to the Championship playoffs in second place behind Top Fuel’s defending championn Antron Brown; Capps started the six-race hegira as the leader. Two races (and two weeks) into the Countdown, those leaders prevail, but Kalitta, despite not having a win yet in the playoffs, has closed the gap to Brown, 2258 to 2245.

Capps hasn’t won either of the Countdown races so far, falling to John Force and teammate Jack Beckman, respectively, who both vaulted the standings to fourth and third respectively. Capps’ teammate Tommy Johnson Jr., who’s been the most consistent driver of the season, holds second place points despite accruing only a single victory.

Kalitta has earned a berth in every Countdown since the playoffs began – this is the ninth year – but he’s faltered down the stretch each time, earning just two wins and zero No. 1 qualifiers. In order to win the title, the quiet Kalitta will have to step that up.

This time around, Kalitta states: “My team is incredibly focused. This Mac Tools/DeWalt FlexVolt Toyota is running strong and we are limiting mistakes. We are right there and know we have what it takes to compete with all the other teams that are chasing the title.”

The Kalitta Motorsports team knows what it takes to win an NHRA title, proving it on the Funny Car side last fall with a huge surge in the Countdown which saw Del Worsham win four of the six races and grab the FC crown.

For Doug Kalitta to perform the same feat, it’ll be necessary for him to help ramp up his team this weekend and the three other opportunities that follow. The NHRA Top Fuel championship is something he and tuner Jim Oberhofer have been trying to achieve in all their years together, to the point where Oberhofer bluntly states: “I know my goal in racing, and that’s to get Doug a title.”

In a sport where consistency is king, Kalitta has won his first-round pairing in 17 of 20 events thus far this season as he guaranteed his 19th consecutive Top 10 finish. And Kalitta remains the only driver who’s been ranked top three in points throughout 2016.

Maple Grove Raceway outside Reading, PA is one of the few tracks on NHRA’s list that has locked Ron Capps’ Don Schumacher Racing NAPA Auto Parts Dodge Charger R/T out of the winner’s circle in his illustrious career. It’s happened 21 times and Capps, together with tuners Rahn Tobler and Eric Lane, are hoping they can bring that ranking to a close.

Although Capps owns 50 NHRA trophies from 23 tracks, one from this fast and quick circuit would take the Californian another step closer to his elusive champion’s trophy.

“You’re going to probably need to at least make the semifinals at each Countdown race and you have to collect those ‘little points’ in qualifying,” Capps observes. Bonus points to the top three qualifiers in each of four sessions [3-2-1] can help when the going gets close at the Finals on the Pomona Raceway dragstrip in November.

He continues: “We still believe that the most important thing is to do well in qualifying, so you start Sunday in the top eight,” he continues, referring to how this gives his tuners choice of lanes. “Don [Schumacher, team owner] always says you have to focus on each qualifying run before ever thinking about what you’ll do on Sunday.”

In the first two Countdown contests, Capps earned 24 qualifying points and made it to the semifinals both times. He currently holds a 48-point lead, extended from 30 at the start of the Countdown.

“Maple Grove is about all-out brute horsepower, strap your belts as tight as you can and hang on. There are going to be guys and girls this weekend who will run the quickest they’ve ever run. That’s the type of track this is.”

This year, in the hopes of trading foul weather for fair, NHRA has gone for an earlier date for its 32nd annual Dodge NHRA Nationals at Maple Grove Raceway outside Reading, PA. But it looks like those aspirations could be foiled, as rain is predicted for both Saturday and Sunday, with fair weather the following two days during the work week.

Will that affect the rise of these two perennial nitro class challengers as they chase their elusive Top Fuel and Funny Car titles? Or could their vast experience allow them to cope better with schedule upheavals than their principal rivals? We’ll find out on Sunday… or maybe Monday or Tuesday…

Pritchett, Hagan, Nobile and Hines race to No. 1 qualifiers on Saturday at Dodge NHRA Nationals