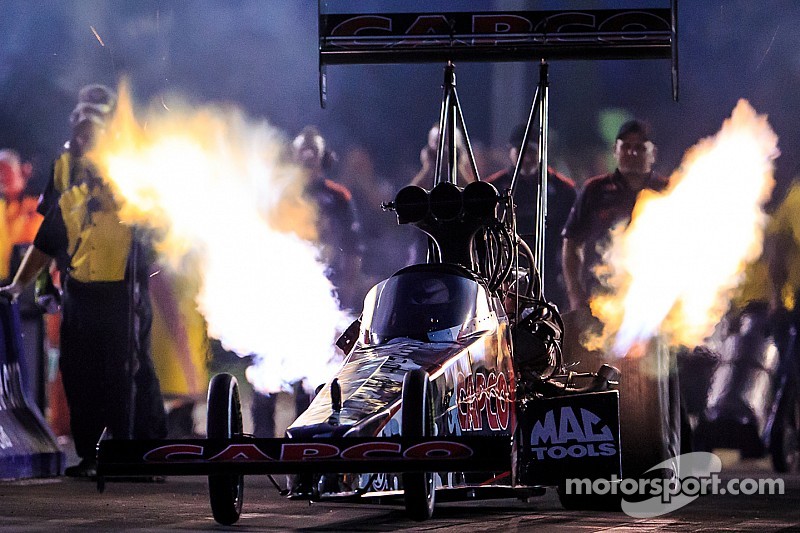 In an effort to keep the excitement level high, the NHRA has changed this up a little bit.

Realizing they need to move the show along better in an era where young fans have the attention span of a gnat, NHRA has made changes to its oil-down policies to keep the entertainment value of its Mello Yello Drag Racing Series contests as high as possible.

When engine explosions occur - primarily in the nitromethane-burning Top Fuel and Funny Car classes - it takes the vaunted Safety Safari extended time to clean up the resulting messes. While NHRA does have entertainment for fans waiting in the stands - and it’s often an excellent time to visit vendors in the midway - the show needs to improve to keep race fans coming the tracks throughout the year.

Racers, of course want to push the boundaries of their equipment and go down the 1,000-foot track as quickly as possible. Pushing the envelope often means placing stress on mechanical equipment that is way higher than it’s capable of taking, causing explosions that spray fluids, resulting in time needed for clean-ups and added track preparation.

NHRA wants to reduce the number of these catastrophic failures by exerting added influence through monetary fines and loss of points in the two nitro classes. There are no changes to oil-down penalties for Pro Stock and Pro Stock Motorcycle categories.

Starting with next weekend’s season-opening Circle K NHRA Winternationals on the Auto Club Raceway at Pomona drag strip, any Top Fuel or Funny Car causing oil-down damage to the racetrack will incur a $1,000 fine and lose five points for the first infraction. A second violation results in a $2,000 fine and 10-point deduction and a third gets $4,000 in fines and the loss of 15 points.

The cycle of fines and points losses continues to increase on a scale for added violations throughout the season-long campaign and the 10th time a car oils the track, the fine amounts to $18,000 and the points penalty increases to a 50-point deduction.

“We offer race teams considerable input on how to avoid oil-downs,” said Graham Light, NHRA’s senior vice president of racing operations. “But the responsibility still lies with the team. In 2014,” he noted, “oil-downs contributed to significant delays over the course of each race weekend. As we increase the number of live TV broadcasts, we have to make sure our events stay on schedule.”

While the fines stay in place throughout the entire 24-race calendar, points deductions are waived during the six-race Countdown to the Championship.

The fines received by NHRA from its racers are used to buy equipment, train personnel, for new technology and other support of the NHRA Safety Safari.