When Shawn Langdon thinks about racing at Summit Motorsports Park, it makes him think of family, friends, and days gone by.

"I have the best job in the world and I drive for the best family in racing but I still have great memories of the days when I was out there on my own," Langdon said. "There wasn't any pressure or commitments to worry about, I was just out there racing for the love of the sport. I didn't have any money but I had fun. Norwalk reminds me of those days." 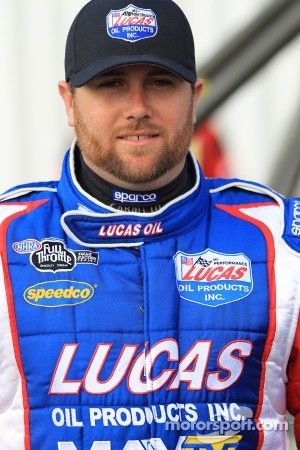 "Norwalk is a cool place to race," he said. "The Bader family make us feel welcome and it has a family atmosphere there. It reminds me of the good ol' days of drag racing, like what it was like back in the day."

A two-time world champion in Super Comp, Langdon is now fighting for one of the 10 spots in the NHRA's version of the postseason, the Countdown to the Championship. He currently sits ninth in the standings, 32 points ahead of 10th place Terry McMillen.

Norwalk's relatively close proximity to Morgan Lucas Racing's Indianapolis-area shop is allowing Langdon to break that stressful routine of heading to the airport, going through security checks, and hopping a plane to the next destination on the NHRA schedule.

"For me, Norwalk is close enough to home that I'll be able to drive over," Langdon said. "I really like to do that. It gives me a chance to be alone for a few hours and clear my mind.

"I drove around this country for many years when I was racing my sportsman cars so driving to a race is something that's very familiar to me."