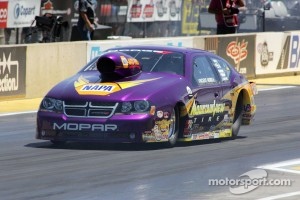 READING, Pa. (October 2) – First year NHRA Pro Stock phenomenon Vincent Nobile suffered a tough loss in round one of this weekend’s Full Throttle series event at Maple Grove Raceway. The frontrunner in the battle for the Rookie of the Year award, Nobile was looking to add to his perfect 5-0 record against opponent Ronnie Humphrey but his NAPA/Mountain View Racing Dodge slowed and he was eliminated in the first round for just the fifth time in 19 events this season.

“We’ve been struggling with our clutch tune-up the last three races and it bit us again today,” said Noble. “Today, the weather was cold and damp and a lot of guys missed the set-up but we were really off. As soon as I dumped the clutch I could tell we weren’t going to make a very good run. It’s very frustrating because I feel like I’ve been driving well but all we can do is keep working hard and head to the next event.”

Despite the loss, the 19-year old college student continues to be one of NHRA drag racing’s brightest young stars. Nobile has won two races this season behind the wheel of Nick Mitsos’ Dodge Avenger and has compiled a solid 26-17 record in elimination rounds, by far the best of any first-year racer on the NHRA Full Throttle tour.

“Right now, we’re just having some issues with our car,” added team owner and crew chief Mitsos. “The tough part is that Vincent’s driving has been outstanding all season long and he continues to do an excellent job. Even though we’ve had some problems lately, he never gets rattled. He’s very smooth and consistent. Lately, we just haven’t given him a car that will allow him to showcase his talents.”

The NAPA/Mountain View team will now head west for the Arizona Nationals in Phoenix, Oct. 14-16.

Hector Arana Jr. has Rookie of the Year lead after Reading