OAK Racing produced a stunning collective qualifying performance at Sebring today to ensure that both the team’s prototypes will start at the sharp end for the opening round of this year’s World Endurance Championship. 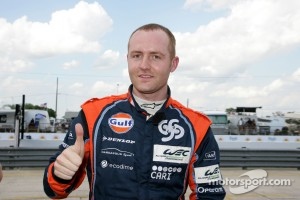 With the two prototype classes split, it was Olivier Pla who set the scene for a memorable day by claiming class pole position at the wheel of the all-new Onroak Automotive-designed and built #24 Morgan 2012 LMP2. Following a slow out-lap in search of space, the Frenchman exploded into life to set the fastest lap of the week so far, a 1m50.467, just as red flags for an accident at Turn 1 brought the session to a premature close.

It was a proud moment for the team who had worked tirelessly throughout the week’s four practice sessions after a sizeable accident cost considerable track time on Monday and Tuesday. Pole position also ensures that OAK Racing is the first LMP2 team to score a point in the re-launched World Endurance Championship.

Having seen his team-mate deliver a headline grabbing time, Guillaume Moreau set off in pursuit of one of his own in the OAK-Pescarolo LMP1. With the factory might of Audi’s diesel-powered trio to contend with, as well as a host of seasoned ALMS outfits, replicating his colleague’s feat perhaps looked like a long shot.

But despite the odds, Moreau produced two fast and consistent laps – his best of the week a 1m48.319 – to end up fastest of the WEC petrol-powered entries and fifth overall.

Sebastien Philippe, Team Principal: “It’s been a great day, especially in LMP2 with the pole position. It was very risky with the red flag. Olivier only had one flying lap to do the time and he crossed the line with just five seconds to spare! In that regard we were a bit lucky but at least we could demonstrate the performance of the car, which is very competitive. Tomorrow is a very, very long race so it’s a completely different story. As for LMP1, I think Guillaume did a brilliant job today. Obviously it’s impossible to catch the Audis but we have a strong car and three good drivers who are very consistent, as well as a car that’s predictable and easy to drive. We’ll see what tomorrow brings.”

Guillaume Moreau, #15 OAK-Pescarolo: “I did say ‘wait and see’ after practice this morning! We knew the HPD guys would be fast, especially the Muscle Milk car with the team’s knowledge of the circuit, so I am not disappointed to be behind them and the Audis. We’re ahead of a lot of big names and can be proud of a job well done today. But qualifying is one thing and the race quite another. Having said that I am confident of the car’s race pace which looks very strong.”

Olivier Pla, #24 Morgan 2012 LMP2: “I had a clear lap and made the most of it. We’ve worked hard to improve the set-up which meant I had the car underneath me to achieve pole. It’s fantastic. The team and Onroak Automotive have been working tirelessly over the winter to develop the new LMP2 and it’s paid off. Tomorrow will be totally different of course. Our target is to stay on the lead lap and be decisive in traffic. I think it’s wide open.”