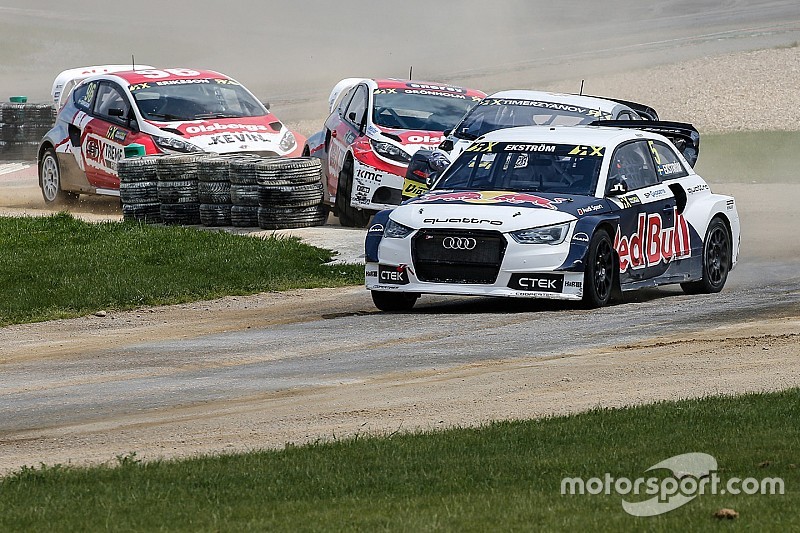 Mattias Ekstrom tops the order at the end of the first day of the World Rallycross Championship at Mettet in Belgium, just five days after winning the second round of the championship at Hockenheim.

Ekstrom won the first race of the weekend on track in Belgium to set second fastest time in Q1, two hundredths of a second slower than the fastest time set by Peugeot-Hansen driver Sebastien Loeb.

The Swede then raced the Frenchman on track in Q2, running second on lap one he took his joker lap at the first opportunity and leap frogged Loeb when the Frenchman took his compulsory extra route on lap four.

In the joker, Loeb ran wide, allowing Johan Kristoffersson room to pass on the inside, the pair exiting the joker side-by-side, Loeb hitting the tyre wall and jumping his Peugeot 208 onto two wheels.

Triple European Rallycross Champion Timer Timerzyanov who has struggled to recreate past form in recent seasons, was right on the pace on the first day in Belgium.

Seventh fastest in Q1 he won his Q2 race, setting the fastest lap of the weekend up until that point in the process and second overall time.

The Russian is third overall ahead of Kristoffersson, who beat his Volkswagen RX Sweden teammate Anton Marklund in a dash to the finish line in their Q2 encounter.

But set fifth quickest time in Q2 to be eighth overall, ahead of leading OlsbergsMSE driver Francois Duval and Latvian Reinis Nitiss.

British driver Liam Doran was 11th fastest in Q1 but clipped the tyre wall on the inside of turn one in his Q2 race and broke a driveshaft on his JRM Racing run Mini, causing him to spin although he did finish the race.

Toomas Heikkinen made a poor start in Q1 and another in Q2 to be 15th on Saturday evening, but the Hooningan Racing Division team had a worse day.

Both Ken Block and Andreas Bakkerud retired within meters of each other in the same Q1 race with electrical troubles, Block then retiring from Q2 with broken suspension.

Bakkerud did finish Q2 in 13th position, the pair propping up the order in 18th and 19th at the end of the day.