On the pace right from the word go, Dani Sordo and Carlos del Barrio hold third place overall after the opening exchanges.

With Barcelona Cathedral serving as a magnificent backdrop and thousands of supporters on hand to cheer on the crews, Rally de España’s ceremonial start turned into something of a street party as the race got underway. After completing a road section of more than a hundred kilometres, it was already dark by the time the cars set off on Querol, the first timed stage. The stage provided an initial pecking order, with Sébastien Ogier first, followed by Dani Sordo. 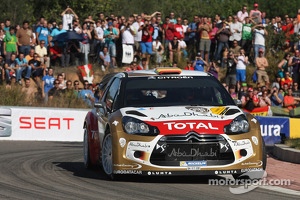 The Spaniard confirmed his good form on SS2, but he decided to drop a few seconds on the third and final stage of the night to slip down into third position. “Everything went well this evening. It was great to drive on these roads at night,” reported Dani on his return to Salou. “I felt it was preferable to lose a little bit of time on SS3 so that Latvala moved ahead of me. That will make it easier for me to choose my starting position for the third leg, which will be on gravel. I’m not a big fan of these kinds of tactics, but we’ve been forced into proceeding like this by the regulations.”

Fifth at the end of the first evening of racing, Mikko Hirvonen was reasonably pleased with how he had started the rally: “There were highs and lows. I started well on SS1, but then I struggled to find the rhythm on the next stage. I was quicker on the last test and that meant I finished the leg among the leaders. I like consistent road conditions like these and I’m really looking forward to tomorrow’s stages…”

Competing in the Abu Dhabi Citroën Total World Rally Team’s DS3 WRC, Khalid Al-Qassimi ended the day in 16th place overall after a testing start to the rally: “The damp patches didn’t really help me get into the swing of things, but I was more aggressive on SS3 and that helped me to get closer to the pace of the leading drivers. I am going to ask the team to soften the set-up a little so that I feel more confident tomorrow.”

In contention for the WRC2 title, Robert Kubica and Maciek Baran made the perfect start to their rally, securing category wins on all three stages. The Poles lead by almost a minute from Elfyn Evans.