Solberg steers Ford to podium on his stunning Fiesta debut 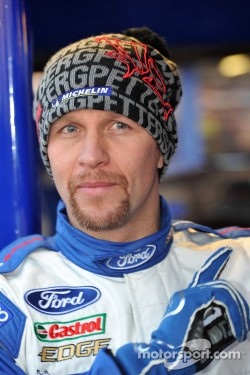 Ford World Rally Team’s Petter Solberg and Chris Patterson have secured their first podium at the wheel of a Ford Fiesta RS WRC after an exceptional performance at this week’s Rallye Monte-Carlo. What's more, the Norwegian, returning to the Ford camp for the first time since 2000, celebrated a personal best with third place at the iconic event.

Rejoining the FIA World Rally Championship calendar for the first time since 2008, Rallye Monte-Carlo provided the WRC crews with five gruelling days of competition covering more than 433km. It has been the longest WRC event since Kenya’s Safari Rally in 2002, and was primarily based in Valence before relocating south to the glamorous Principality of Monaco on the French Riviera.

Renowned as a rally with ever-changing road and climatic conditions, this year’s demanding event proved no different as the 18 speed tests challenged the WRC crews with a mix of wet and dry roads compounded by snow, fog and black ice. Tyre choice proved critical and played a pivotal role from the outset as the WRC teams could select between five types of new-for-2012 Michelin tyre.

After team-mate Jari-Matti Latvala’s retirement from the lead on the opening day, a cat-and-mouse battle for second place ensued between Solberg and Dani Sordo. Without studded tyres, 2003 World Rally Champion Solberg struggled with grip on the treacherously slippery roads on Friday morning and was knocked back into third.

Three stage wins on Saturday, however, saw the 37-year-old driver slash Sordo’s advantage from over one minute at the start of the day to less than 20sec by the time the WRC crews reached the overnight halt at Monte-Carlo’s harbour front. With a short 5.16km Power Stage concluding the WRC curtain-raiser on Sunday, Solberg applied a measured approach to ensure a podium spot.

“I’m over the moon. I’ve absolutely loved this rally from start to finish and this is the best start to a WRC season I’ve ever had,” said a delighted Solberg at the finish line. “It is my first rally in the Ford Fiesta RS WRC with so little testing beforehand, and we improved our speed all the way through. For me, this rally was mainly about getting some kilometres in the car, improving our speed and getting to the finish.

"I love the car – it is really fast, I can tell you! It suits my driving style very well. I’ve been waiting for a long time to get into a situation like this, and to have the full support from the Ford team feels fantastic.

“You need to have a good start to the season if you want to fight Seb [Loeb],” continued Solberg. “I understand the car is even better on gravel and snow, so I’m looking forward to moving onto those surfaces next. To finish this rally in the top three is the perfect start to the season – I couldn’t have asked for anything more. Now I can concentrate solely on the driving, and I can’t wait to get to Sweden!”

Ford Team Principal Malcolm Wilson was encouraged by Solberg’s first outing in the Fiesta RS WRC. “Petter’s experience has shone through as he has delivered a superb performance. The car has been 100 per cent faultless throughout the rally, and Petter has been really happy with it and has settled into the team very well.

“To leave here with his best-ever Monte-Carlo result is a great platform to build upon over the rest of the year,” Wilson continued. “This has given us a lot of confidence going forward. We had the fastest driver on this rally with Jari-Matti leading early on and Petter has done a great job, so looking to the future we know we’ve got a really strong team. We have a test before Sweden, and I’m confident we’ll come away with another positive result next month.”

Ford of Europe motorsport chief Gerard Quinn was delighted with Solberg’s drive. “This has been an extremely challenging start to the 2012 season, considering we’ve covered 433 stage kilometres over the last five days. We’re thrilled for Petter and Chris finishing on the podium on their first outing in the Fiesta RS WRC. There was obviously disappointment with Jari-Matti going out of the rally so early on, but from the pace he showed, I’m confident it’s going to be an exciting season for the Ford World Rally Team,” he said.