Dani Sordo continued the last day of Rally Spain where he finished on Saturday, by winning four more stages in his MINI John Cooper Works WRC, taking the tally to six.

He won all three stages this morning and for the afternoon, with rain forecast, Sordo gambled on running only hard Michelin tyres and it paid off winning the last stage and only coming second on the Powerstage due to the onset of rain. 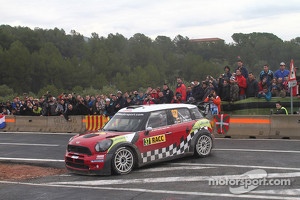 Meanwhile Jarkko Nikara, in his first event in a World Rally Car, finished in fifth place overall, one of the best WRC debuts in recent years, confirming what a great talent he is.

After going off the road on the first day's very wet gravel stages, Sordo returned to competition under Rally 2 on Saturday's tarmac stages.

Unfortunately, on the first stage of the day, a fuel injector failed meaning the car ran on just three cylinders for the morning's stages. After a heroic effort by the Prodrive WRC Team during service, the problem was fixed and Sordo went out and returned the favour by immediately setting two fastest stage times, showing just how fast the MINI WRC is.

Nikara meanwhile was setting competitive stage times in his MINI on the tarmac and steadily moving up the leaderboard during Saturday and Sunday as drivers ahead of him found trouble.

Dave Wilcock said: "I have mixed emotions. Really pleased that we have shown just how fast the MINI is and that it is already more than a match for the Ford and Citroen, but also disappointed thinking 'what if'.

If Dani had just come through the first day unscathed and not had the injector fault, we could have been challenging for at least a podium and possibly a win.

"Jarkko has achieved an amazing result on his WRC debut. He has driven with maturity and soaked up all the advice we have given him over the weekend.

He clearly has what it takes to become a world class driver and follow in the driving boots of the other great Finnish drivers.

"I'd like to thank all our partners for their support this year, particularly Michelin and BP. Now it's back to Banbury and our development programme.

Just last week our race engineers found some significant extra performance in the engine, which we didn't have time to include here, and there is another major mechanical upgrade due in March.

It's too early to say what our WRC programme will be for next year, but we aim to be in Monte Carlo in January and carry on where we left off here."

Dani Sordo said: "It was really good today and the car was great, but it was disappointing we had rain in the powerstage when the others did not, otherwise we could have won that too.

It has been great working with the team this year and I hope something can come together for next year, everyone has worked so hard."

Jarkko Nikara said: "The weekend was difficult and a real challenge, but we came through and we got a great deal of experience. I was fifth, but the gap was quite big, still everybody else also made some mistakes as it was difficult conditions.

The car felt fantastic, but it is not easy to be quick straight away, so I need some more experience and confidence to push really hard."