Benoit Nogier's prediction that Petter Solberg could be a threat for victory on RallyRACC-Rally de Espana has so far proved to be correct after the Norwegian privateer went fastest during this morning's pre-event shakedown.

Solberg and co-driver Chris Patterson completed the 2.94-kilometre practice course near to the service park in Salou in a time of 2m08.5s, two-tenths of a second faster than the time recorded by Federico Villagra’s Munchi’s Ford Fiesta RS WRC.

Nogier, whose Citroen Racing Technologies outfit runs Solberg’s Citroen DS3 WRC, said: “If he has a little bit more [luck] than usual he could be a real force to be reckoned with.” 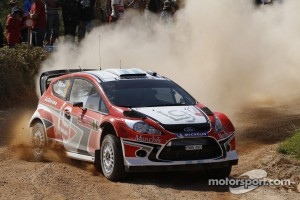 Villagra, who only arrived in Spain on Wednesday morning due to the ash cloud currently affecting flights in his native Argentina, said: “Maybe not competing in the WRC for three months has helped me. For sure it helps for the confidence because this was my first time driving the car on Tarmac but this is just the shakedown.”