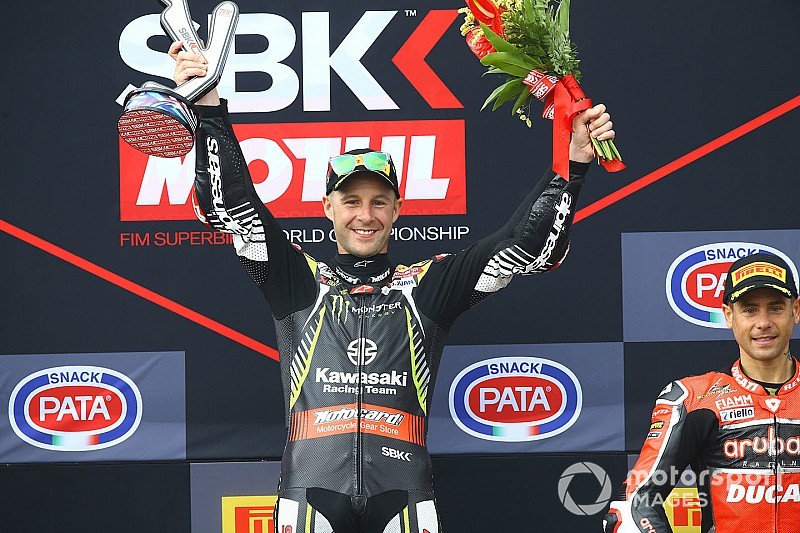 Bautista led off the line in Sunday's feature race at Misano before crashing at Turn 4 on lap three, tallying up his second race crash in as many rounds - the Spaniard having fallen from the lead at Turn 1 at Jerez.

Rea finished second in Jerez race two, and won both feature races at Misano to reduce Bautista's lead in the standings to just 16.

“It's unfortunate for him, but he's not invincible,” Rea said of the Ducati rider. “Of course, it's always costly when you make a mistake, and I picked up the pieces. It wasn't a dominant race win, because the strongest guy was in the gravel – like Jerez race two as well.

“So we've had two race weekends in a row where we think it's completely out of our hands, we're kind of back in the mix a little bit.

In the Superpole race, Rea also crashed, losing the front of his Kawasaki at Turn 10 late on while running behind Bautista in second.

Holding onto the bike as it rolled on the asphalt, Rea rejoined to finish fifth. He admits he was “riding over his head” to keep up with Bautista, which led to the fall.

“I lost the front, but [my] motocross instincts kicked in,” Rea added. “I could feel myself going round and I thought I might just be able to flip this. So I just did my best to dig the handlebars in and flip the bike over.

“By sheer luck I kept the clutch in and was able to finish fifth, so all-important for the weekend.

“It was just my mistake. I was riding over my head just to stay with Alvaro. He was just gaining so much from the exit of Turn 6 to [Turn] 8, and also the exit of 10 and the exit of the last corner.”

Commenting on the championship situation, Rea says it is still “super difficult” to challenge Bautista right now, but insists he is going to each race weekend with “an open mentality”.

“Just like always, the same story,” he said when asked of his thoughts on his hopes. “The championship is long. After riding with Alvaro in the Superpole race, it's super difficult to compete with this package right now.

“So the best we can do is try to get the best every weekend, try to do the maximum from our ZX-10RR.

“It was a super nice Sunday for Kawasaki because we put three bikes on the podium, so let's see what Donington brings. [We] just [need to] go to every race with an open mentality.”

Bautista "very angry" after another "not acceptable" crash