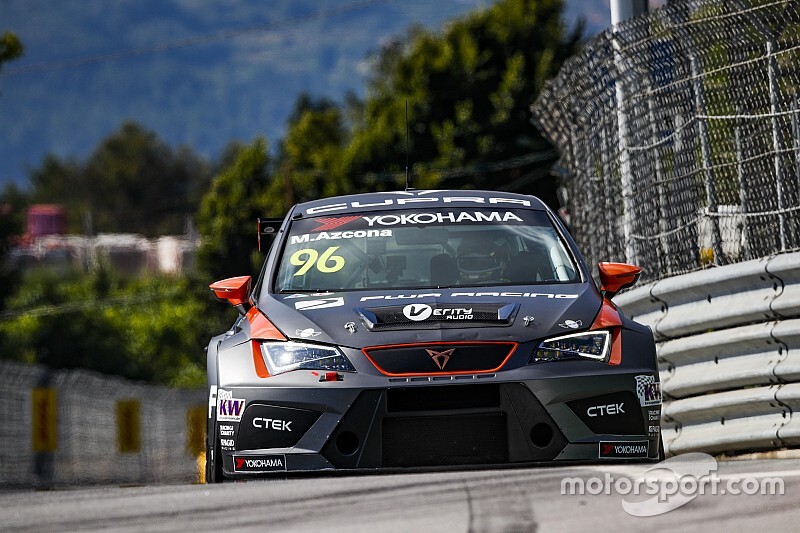 The Spaniard started third and made his own joker on the fifth lap of 11 to keep the pressure on leader Ma.

Ma went too deep in the joker and lost out to Azcona after clumsily bouncing over the kerbs on entry.

Race one winner Michelisz started a lowly 16th after trouble in qualifying, but was forced out following contact with the second Alfa Romeo of Kevin Ceccon.

The Hungarian received a drive through penalty for his part in this incident, but his race was ultimately run due to extensive damage on the front left hand corner.

Gabriele Tarquini and Augusto Farfus, who both started from the back of the grid following post-qualifying engine changes, also pulled out.

At the start, Ma got the jump on fellow front-row starter Guerrieri and Azcona as joker lap strategies dictated the pace of the majority of the pack.

The Cyan Racing Lynk & Co team was the first to implement ‘backing up” strategies, with Yann Ehrlacher making a gap for uncle Yvan Muller to fit in.

This tactic worked not only for Muller, but also for Ehrlacher as KCMG Honda duo Tiago Monteiro and Attila Tassi - who is set to start race three from pole - did likewise.

Monteiro and Tassi secured ninth and tenth place finishes as a result, with Ehrlacher ending up eighth, one place ahead of Guerrieri’s Munnich Motorsport teammate Nestor Girolami.

Having successfully jumped Guerrieri on the joker lap, Azcona then set a number of fastest lap times to close to within two-and-a-half seconds of Ma before the latter’s turn to go through the joker.

Ma locked up slightly on entry and lost a handful of time to the reigning TCR Europe champion, who eventually opened up a 4.832s winning margin at the finish.

Just off the podium, Jean-Karl Vernay finished fourth in his Leopard Racing Audi, nipping past the sole-remaining BRC Racing Hyundai of Nicky Catsburg, who tried in vain to hold up Guerrieri before his joker two laps from home.

The Swede attempted to get past the Audi of Fred Vervisch in the closing laps, and only just avoided the back of the Belgian after missing his braking point at the Turn 18 chicane.

Portugal WTCR: Michelisz closes in on Guerrieri with win