Former IndyCar star Robert Wickens is “aiming big” on his return to racing, three years after the brutal crash that left him with a spinal injury that curtailed his topline open-wheel career.

Wickens will race in the TCR class of the IMSA Michelin Pilot Challenge this season in a Hyundai Elantra N run by Bryan Herta Autosport, teaming up with fellow Canadian Mark Wilkins. He will use a specially-modified steering wheel fitted with hand-controlled brake and throttle systems, which Wilkins will be able to switch on or off during their driver change.

Wickens will make his racing return at Daytona at the end of the month, in the Rolex 24 Hours support race, and is aiming high from the start of the season.

“Aim big, right? Let’s go for the win,” he said. “It’s not every day you can jump in with a team that’s won multiple championships with a champion teammate. I couldn’t be in a better place.

“I think the goal is simple, go and try to win the thing. I felt I was forced to leave in 2018 at almost the peak of my career. I felt great, never felt fitter, never felt stronger. I was driving the best I’d ever driven. And I wanna hit the ground running where I left off – at least challenging for victory and the podium.”

In his press call on Friday afternoon, Wickens spoke of his relief at getting back into the driving seat after more than three years on the sidelines while he attempted to regain mobility in his lower limbs.

Now resigned to the fact his recovery has plateaued, he has pressed ahead with working out the hand control system after a ‘track day’ in one of Hyundai’s TCR cars at Mid-Ohio last year and now committed to a full season with the factory-blessed BHA squad.

“There’s a lot of emotions, a lot of gratitude for sure, to Bryan Herta Autosport and Hyundai for giving me this opportunity,” he added. “First off, there were a lot of times during my recovery when I thought it was possible, then I thought it wasn’t going to be possible.

“It took a lot of hard work, a lot of dedication, but also I wouldn’t be here without a lot of support from a lot of really good people behind me. Bryan Herta of course is a racer but as I’m learning more and more he’s just a stand-up guy and an awesome person to know. So here we are… a little late but better late than never, and I can’t wait to get in the car next week.” 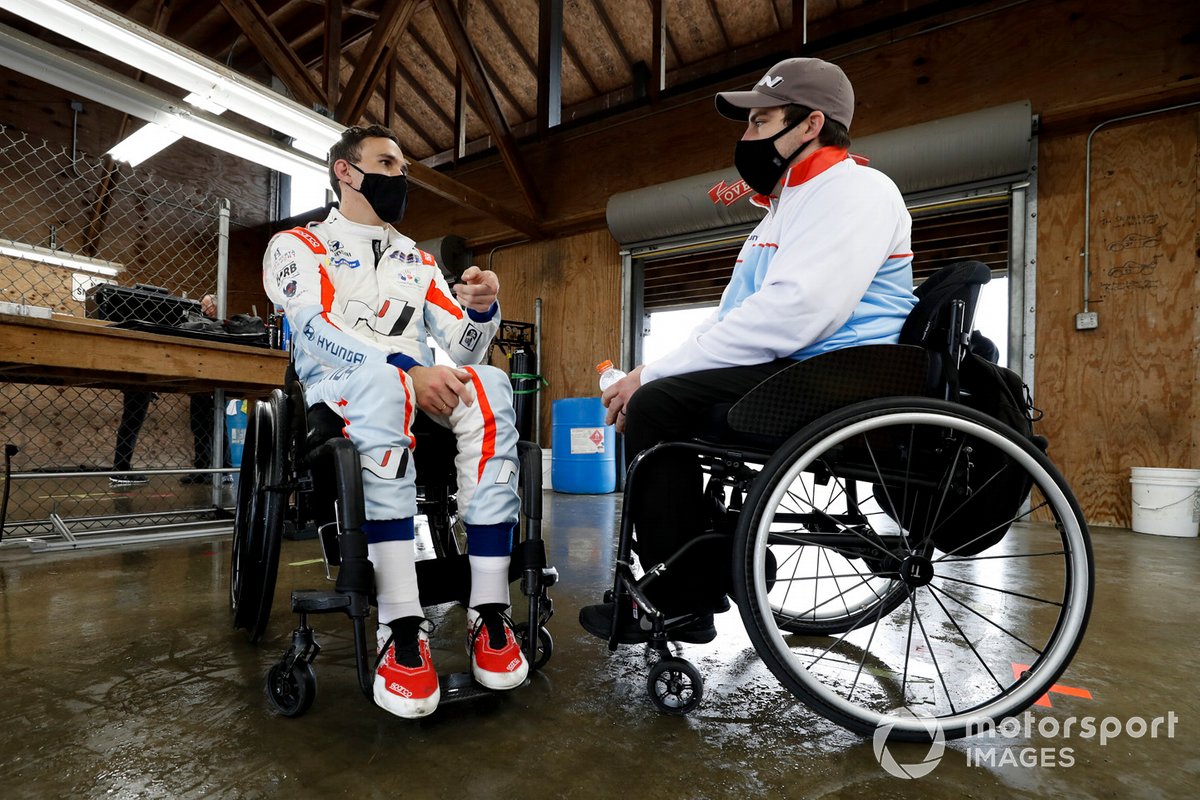 When asked to explain how he arrived at this point, after years of rehabilitation and gym work, Wickens replied: “I think every recovery is remarkable in its own way. At the time I was very motivated to return to the best version of me I could be.

“I know I’m a competitor, and if I don’t give myself a level of competition I know I wouldn’t possibly work hard enough to get to the level where I am today. I don’t put myself in any category above anyone else who’s recovering from an injury or setback in life. It’s been quite the ride where here we are and I’m happy to be here.”

New teammate Wilkins has welcomed Wickens on to the roster, in what is a six-car Hyundai attack on the TCR class that is has dominated in recent seasons – winning the title last year with Michael Lewis and Taylor Hagler.

“I’ve actually know Robbie from quite a young age,” said Wilkins. “I’ve always wanted to never really race against him because he’s just so super-talented! So to have the opportunity with Hyundai to drive with Robbie and go out there and challenge for race wins and hopefully a championship is really just an incredible experience.

“It’s been exciting at Hyundai every year at Bryan Herta Autosport – a super successful program for us – and just kudos to Bryan and Sean [Jones] for an incredible amount of hard work over the years and to Hyundai just for giving us three TCR cars since 2018 with the i30N TCR, the TCR Veloster and now the Elantra N TCR.

“With Robbie on board and having gotten to work so closely with him and obviously new challenges and just a tremendous relationship with Hyundai and our fantastic team I’m very confident we’ll get to Daytona and be right up there right away.”