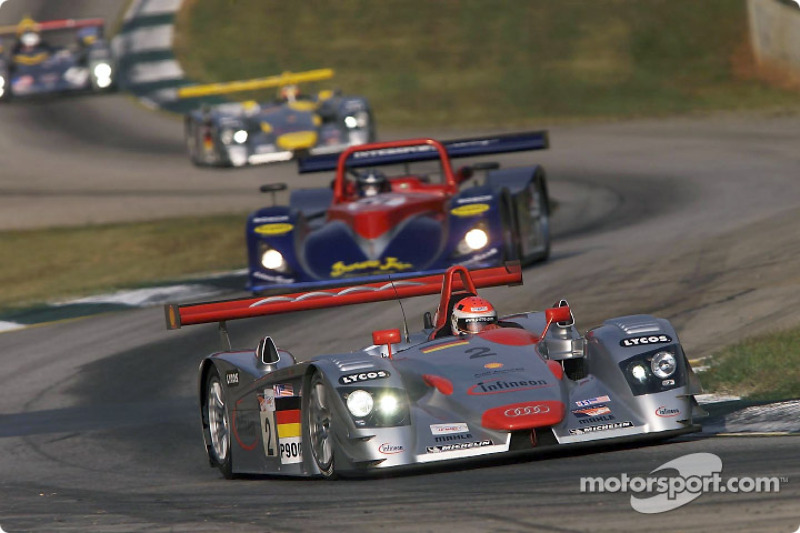 As 2014 is approaching with a new era in North American sportscar racing, with the birth of the United SportsCar Racing, we at the Audi Motorsport Blog start a series of posts about Audi's era of dominance in the ALMS.

By Tarek Ramchani Part two of Audi's legacy in the American Le Mans series, focusing this time on the 2001 season. The year 2000 was a magical season for Audi, winning the driver, team and manufacturer titles. For 2001 the target was to defend the three crowns and bring them back to Ingolstadt.

Big changes for 2001, the driver champion, Allan McNish, had left the series and Audi for Formula One with Toyota. BMW Motorsport left the upper LMP900 class, withdrawing their BMW V12 LMR, and entered the production based GT class. And for the first time since Audi's sportscar program debuted, customer teams fielded the Audi R8. Champion Racing from Florida and Johanson Motorsport (Arena) from the UK, each with a one-car effort. The customer teams were armed with one-year old and ex-factory Audi R8 cars from 2000.

Audi's main challengers were the strong Panoz Motorsports effort along with Cadillac, a factory team from GM Racing. Audi entered two works cars under the Audi Sport North America banner, which were again managed by Team Joest. The #1 Audi for Tom Kristensen and Dindo Capello, and the sister #2 R8 for Frank Biela and Emanuele Pirro. The 2001 American Le Mans Series consisted of a ten race calendar, with two events being held in Europe. The season opener was set at Texas Speedway, Audi won the event with a fine 1-2 victory for the factory team. The race win went to Tom Kristensen and Dindo Capello. The next round was the prestigious 12 Hours of Sebring. Audi dominated Florida's classic with an impressive 1 2 3 4 win. The Audi of Dindo Capello, joined this time by Laurent Aiello and the late Michele Alboreto, won outright ahead of the sister Joest car, whilst the customer teams Champion Racing and Johansson Motorsport finished in third and fourth. Later the ALMS field moved to Europe for two meetings. The races were combined events between the ALMS and ELMS (new European Le Mans Series). Round 3 was at Donington Park with Audi again dominating. A 1-2-3 win with the #1 Audi R8 of Tom Kristensen and Dindo Capello victorious. At Jarama in Spain for round 4, Kristensen and Capello did it again beating their teammates Biela and Pirro. The 2001 American Le Mans Series gave Audi great satisfaction. Eight race wins and all three titles were successfully defended. Emanuele Pirro won the driver's title in the #2 Audi R8, followed by his teammate Frank Biela in the standings. Their teammates Dindo Capello and Tom Kristensen were third and fourth respectively. Audi Sport North America again won the team's title and Audi again secured the manufacturer's trophy. Great satisfaction also for the privateers Johansson Motorsport and Champion Racing. Both teams performed very well all season long, and the Johansson Motorsport squad was crowned champions of the ELMS. For 2002, Audi would again join the ALMS, but for the last time as a full factory effort with the R8. Photo credit: Audi Media

Ostella to take on dual roles at home track in Mosport