Team principal Paul Miller said a podium result was more than possible after the collective efforts of Bryce Miller, Holzer and the No. 48 Chopard/TOTAL Porsche team. 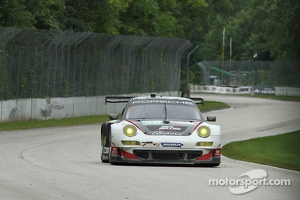 Miller started fourth in the two hour and 45-minute timed race, pitted early when the rain stopped and the track began to dry, and Holzer brought the car home the remaining two-plus hours to equal Paul Miller Racing’s best finish in the ALMS GT class, set at Baltimore in 2011 with Miller and Sascha Maassen driving.

“The conditions were difficult in the beginning,” Bryce Miller said. “We had a little bit of a braking issue and vibration issue that been following us around a little bit since it occurred in the morning warm-up, so that was a little disconcerting going into the rain portion of the race.”

An early strategic call by the No. 48 Chopard/TOTAL Porsche team would pay dividends after the first wet ALMS race laps of the season. A yellow flag just 24 minutes into the race allowed the team to pit, swap Miller out, put Holzer in, and switch from wet to slick Michelin tires.

“The pit stop, the strategy call was a great call,” Bryce Miller said. “We took on slicks before a lot of other cars. We were able to leapfrog up to fourth. That’s ultimately what kept us in the fight just to be there in the end. Marco did a great job today by racing hard and saving fuel at the same time.”

Paul Miller Racing was the only GT team to make a driver change that early in the race, and the time gained there allowed them to enter the leading battle the rest of the day. Holzer took it from there, running consistently in the top four or five for the remainder of the race.

“We’d raced 25 minutes and it was very tough for Bryce in the rain and everyone else I would say,” Holzer said. “We had the decision at that point to say, ‘OK, do we go on slicks?’ and then they called me in to say, ‘Yeah we need you in the car now!’ I was at the right point ready to go. Then it was just an amazing race from there, battling all the GT cars.”

With one hour and 15 minutes remaining in the race, a yellow flag made for a frantic pit lane because all of the top 10 GT cars, including Holzer, pitted. The No. 48 Chopard/TOTAL Porsche took on four fresh tires and fuel, and thus began the fuel mileage run to the finish – where it was going to be a challenge for any of the cars to make the checkered flag without another stop.

Holzer spent his final stint needing to maintain the gap to the pair of Corvettes and No. 91 Viper in front of him, holding off the sister Porsche 911 GT3 RSR entered by CORE autosport behind him, dealing with faster prototype traffic overtaking at all times, and saving fuel. He did all of that with flying colors and a final caution with just eight minutes remaining ensured he could bring the No. 48 Chopard/TOTAL Porsche home fourth.

“You have to find it out for yourself where you can save fuel,” Holzer said, noting the length of the 4.048-mile Road America track in terms of fuel conservation. “I think the strategists and all the guys behind the computers did an awesome job calling me. That made the result happen.”

Team principal Paul Miller said a podium result was more than possible after the collective efforts of Bryce Miller, Holzer and the No. 48 Chopard/TOTAL Porsche team, which was also the top-finishing Porsche 911 GT3 RSR for the second time in 2013.

“We actually think we had a better car than that,” Paul Miller said. “It was a shame the (mid-race) caution didn’t last a little longer so we could fight at the end. But fourth is our best of the year, and we’ll take it.”

Next up for Paul Miller Racing and the American Le Mans Series is the Grand Prix of Baltimore, August 30 – 31. The featured 2-3/4 hour race can be seen live online at ESPN3, Saturday, August 31 at 3:30 p.m. EDT with ABC’s coverage scheduled to air the following day, Sunday, September 1, at 12 p.m. EDT.